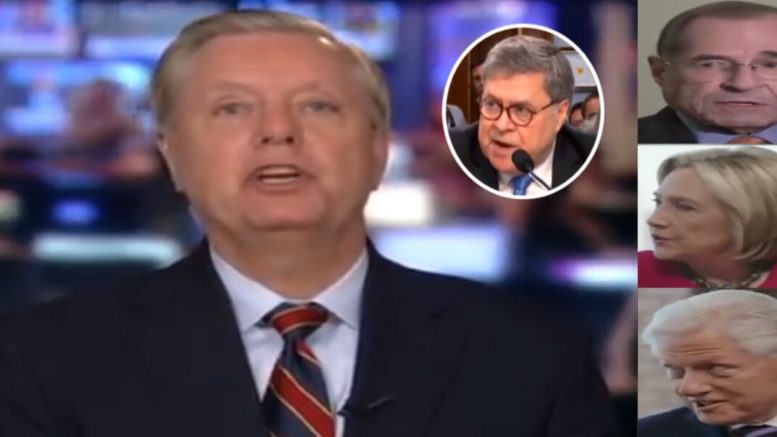 Senate Judiciary Chairman, Lindsey Graham (R-SC), joined host Martha MacCallum on Fox News Monday where he weighed in ahead of Attorney General William Barr’s anticipated testimony on Capitol Hill that will take place Wednesday and Thursday before the Senate and the House judiciary committees.

Graham also took aim at Bill and Hillary Clinton, who made remarks about the Mueller report.

Hillary Clinton appeared on none other than Comedy Central, where she and Bill Clinton talked about the Mueller report, legal degrees and Attorney General William Barr. Oddly enough, Mueller’s investigation started because of Russian lies that were bought and paid for by Crooked Hillary– the Steele dosser.

Bill Clinton claimed that what is in the Mueller report is “not true” and that Barr “misrepresented” the report. Crooked Hillary chimed in and suggested that Willaim Barr should “go to law school.”

Sen. Graham laughed and responded, “Of all the people that I would seek legal advice from, Clintons would be at the bottom of my list. They’ve had enough legal trouble in their life for about 10 people.” He added, “So all I can say to Bill Barr, you can withstand this criticism; go and do your job.”

Graham also noted with sarcasm that the Clintons are on Comedy Central for a reason: That it’s funny. (Continued Below)

Asked about Rep. Jerry Nadler trying to question Barr with staffer attornies during Thursday’s House Judiciary Committee hearing, Graham said, “I can understand [Barr’s] concern. What the House is doing is way over the top.”

“Mueller is the final word on this. I fought like hell to make sure that Mueller could do his job without any interference. I introduced legislation so that he couldn’t be fired without cause. Mueller said that [Trump] didn’t collude with the Russians.” Graham continued.

“This is over, this is political revenge! The House is on a witch hunt, truly a witch hunt to try to make something out of nothing. The President did nothing to impede Mueller and if the House pursues this, it’s because they’ve gone crazy when it comes to Trump.” He expressed. (Video Below)

(Related: Sally Yates Suggests Trump Committed Obstruction, Fitton Swipes Back: ‘[She] Should Be The Subject Of Investigation’)