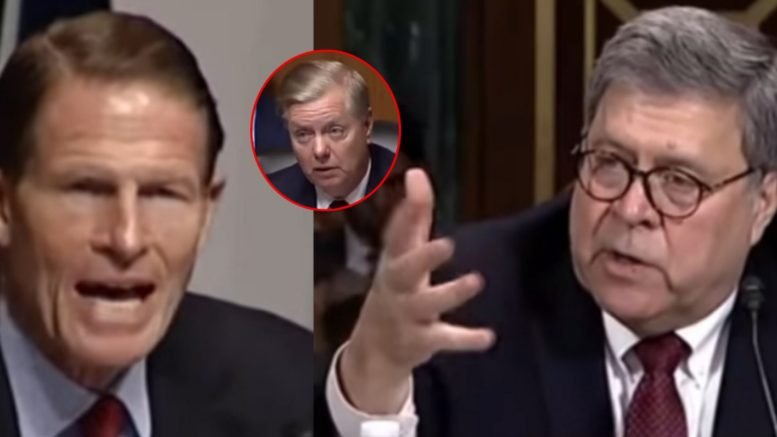 Democrat Senators were focused on only one subject Wednesday while questioning the Attorney General: the letter that Robert Mueller sent to William Barr.

Baseless attacks emerged throughout the hearing that centered around the March 27th letter from Mueller where he reportedly asked Barr to release 19 pages so that it did “not confuse media reports.” Instead, Barr released the full redacted report of 448 pages, two weeks later.

After Mueller sent his letter to Barr, the Attorney General said that he picked up the phone, called Mueller and asked, “Bob, what’s with the letter?”

Barr said that he talked to Mueller for about 10-15 minutes on speaker phone, including having multiple witnesses in the room while doing so. (Continued Below)

Barr explained that the Mueller team was concerned about the way the media was handling the take from Barr’s summary and wanted the Attorney General to better explain to the public to avoid confusion.

(Related: Sen. Cruz Holds Up The Mueller Report & Gives Dems A Taste Of Their Own Poison: ‘Oh, The Calamity’)

Barr also said that he asked Mueller if his summary was misleading and if it was accurate. Mueller admitted that Barr’s summary was correct, but the press coverage was incorrect. (Continued Below)

Sen. Blumenthal suggested that Mueller’s complaint was about Barr’s characterization of the report. “This letter was an extraordinary act. A career prosecutor rebuking the Attorney General of the United States memorializing in writing, right? I know of no other instance of that happening. Do you?” Blumenthal asked of Barr.

Barr shot back and said that he doesn’t consider Bob a career prosecutor, clarifying that he was the head of the FBI for 12 years and a political appointee of the DOJ. “You know, the letters a bit snitty and I think it was probably written by one of his staff people.” Barr declared.

Asked if he or his staff made a memo of the conversation he had over the phone with Mueller, Barr responded that there were notes taken.

“May we have those notes?” Blumenthal asked.

Barr responded bluntly, “No”, and then, Blumenthal asked, “Why not?”

“Why should you have them?” Barr fired back leaving the Connecticut Senator’s jaw on the floor. (Video Below)

Senate Judiciary Chairman Lindsey Graham interjected calmly yet professionally and suggested that when Mueller comes to testify that he will ask about the conversation.

We leave you with why we titled the article the way we did:

….left and right, he then woke up from his dream screaming that HE LIED. Next time I go to Vietnam I will ask “the Dick” to travel with me!

(Related: Sen. Graham Steps In After Hirono Orders AG Barr To Resign: ‘You Slandered This Man From Top To Bottom’)