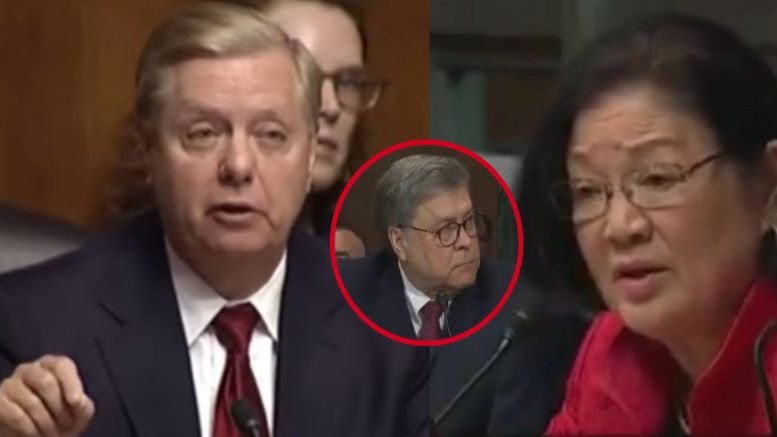 Attorney General Bill Barr testified before the Senate Judiciary Committee over the Mueller report on Wednesday, however, some of the Democrat Senators used their opportunity to attack Barr just as they did similar to Justice Brett Kavanaugh.

Sen. Mazie Hirono (D-HI) namely, severely criticized Barr during the hearing and accused the Attorney General of sacrificing his reputation in service to President Trump.

Sen. Hirono spent her time delivering attacks in which she blasted Attorney General Barr over his handling of the Russia investigation, including a memo he sent to the special counsel about the investigation prior to serving as attorney general, and his four-page summary of special counsel Robert Mueller’s report.

The Trump hating Senator also accused Barr of lying to lawmakers– directly to his face, compared him to President Trump’s closest allies and directly told the Attorney General: “You should resign.”

“Mr. Barr, now the American people know that you are no different from Rudy Giuliani or Kellyanne Conway or any of other people who sacrifice their once decent reputation for the grifter and liar who sits in the Oval Office,” Hirono claimed.

Hirono accused William Barr of lying to lawmakers when he said he was unaware of Mueller’s concerns with the Attorney General’s four-page summary of the investigation. (Continued Below)

“You used every advantage of your office to create the impression that the President was cleared of misconduct. You put the power and authority of the office of the Attorney general and the Department of Justice behind a public relations effort to help Donald Trump protect himself,” Hirono whined.

Further, she added that she “wasn’t surprised” by what she described as the Attorney General’s efforts to protect President Trump, and said that was the reason she joined other Democrats in voting against his confirmation.

“Now we know more about your deep involvement in trying to cover up for Donald Trump. Being attorney general … is a sacred trust. You have betrayed that trust, America deserves better. You should resign.” Hirono spouted off while displaying her stage 5 Trump derangement syndrome. (Continued Below)

Graham declared, “I gave you seven minutes and you slandered this man from top to bottom. If you want more of this you’re not going to get it. If you want to ask him questions you can.”

"You slandered [AG Bill Barr] from top to bottom, so if you want more of this you're not going to get it. If you want to ask him questions, you can." pic.twitter.com/iHcNH2JhRB

Watch the full remarks between Sen. Hirono and AG Barr:

(Related: Rep. Collins RIPS Democrats At The Mueller Report Hearing: ‘[Nadler] Has Decided To Appear As If They’re Doing Impeachment’)