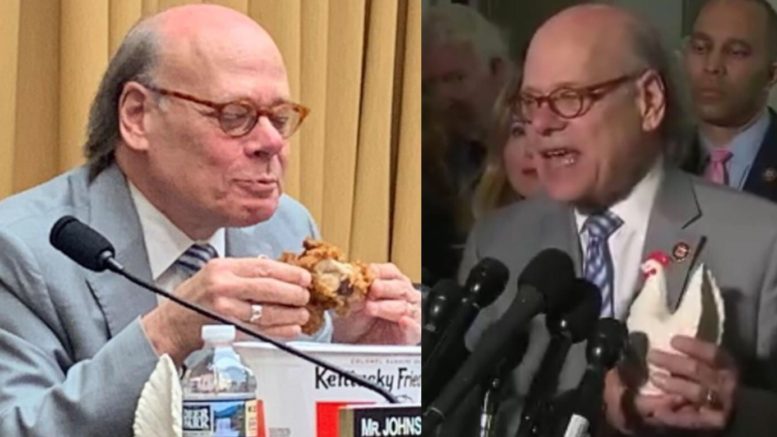 Rep. Steve Cohen (D-TN), one of the many House clowns in Congress, brought a rubber chicken and a bucket of KFC fried chicken to the House Judiciary Committee hearing Thursday after Attorney General William Barr declined to appear for their circus show.

This comes after Rep. Jerry Nadler (D-NY) insisted on voting Wednesday for “staff” to ask questions of the Attorney General, and Barr wasn’t interested in the Chairman’s shenanigans.

Rep. Cohen sat in his seat in the committee room Thursday and ate fried chicken, along with displaying a rubber chicken prop over the seat Barr would have sat in if he had appeared before the committee.

The anti-Trump Congressman called Barr “#ChickenBarr” on Twitter threatening to use subpoenas. He wrote on Wednesday night, “#ChickenBarr won’t be appearing before @HouseJudiciary tomorrow. The Attorney General shouldn’t be afraid of taking questions from counsel or members. Contemptible behavior. Fortunately, we have subpoenas ready.”

In a press statement after the committee was dismissed, House Democrats held a news conference where they vented their frustration over the Attorney General not showing.

Cohen held up his prop chicken and said, “Chicken Barr should’ve shown up and answered questions. This man was picked to be Roy Cohn and to be Donald Trump’s fixer.” (Continued Below)

Ranking member of the committee, Congressman Doug Collins (R-GA), argued in his opening Thursday that Chairman Nadler took the ability away from Congress to hear from the Attorney General about the Mueller report, but also the American people and that it was a travesty.

“Yesterday, we found that he wanted staff to question the Attorney General because he calls the five minutes per member is not enough. But yet, we approved a motion yesterday that said we could do a whole extra hour between the Chairman and myself.” Collins said.

“Instead, we go back to a circus political stunt to say we want it to look like an impeachment hearing because they won’t bring impeachment proceedings. That’s the reason.” He expressed. (Video Below)

I’ll be on @MSNBC at 9:30 CT/10:30 ET to discuss #ChickenBarr and his refusal to answer questions before the #HouseJudiciaryCommittee. pic.twitter.com/AZVONTuaYB

"Chicken Barr should have showed up today," @RepCohen said while eating Kentucky Fried Chicken, at the hearing Barr was too much of a coward to show up at. "It's a sad day in America," Cohen stated. #MuellerGate pic.twitter.com/Kh1PG9Rocv

.@RepCohen brought a plastic chicken and a bucket of Kentucky Fried Chicken (which he is tucking into ahead of this 9AM House Judiciary hearing.)

“He’s here,” Cohen said, pointing to the chicken and referring to AG Barr who is not attending after a grilling in the Senate. pic.twitter.com/bGz3HCRSCQ

.@RepCohen: "#ChickenBarr should've shown up today and answered questions… This man was picked to be Roy Cohn and to be Donald Trump's fixer." https://t.co/m8Z2otqC1I pic.twitter.com/v6nTn1pO8i

#ChickenBarr won’t be appearing before @HouseJudiciary tomorrow. The Attorney General shouldn’t be afraid of taking questions from counsel or members. Contemptible behavior. Fortunately, we have subpoenas ready. pic.twitter.com/a4QecbqcHN