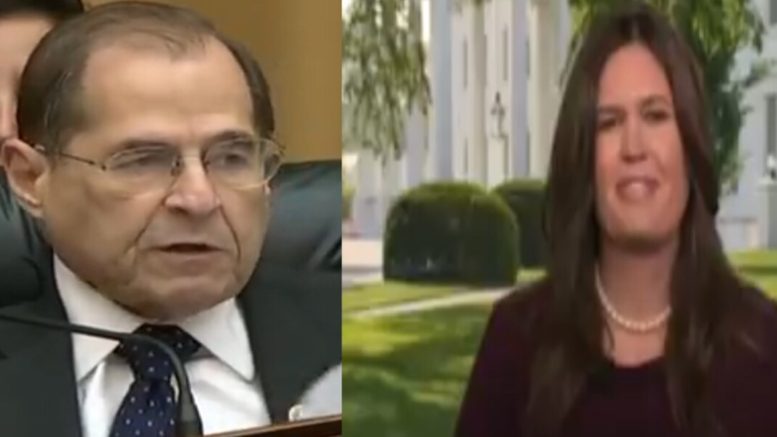 White House press secretary, Sarah Huckabee Sanders issued harsh criticism toward Democrats on Thursday morning after the way they treated the Attorney General during the Senate Judiciary hearing on Wednesday.

Further, she pushed back at House Democrats who decided they’re unable to ask William Barr questions on their own without the help of “staff.”

The press secretary said that Democrats embarrassed themselves on Wednesday during the Senate Judiciary hearing with the Attorney General because of the “outrageous questions” they laid out and asked of him.

Sanders said the House Democrats in Congress witnessed how Barr handled himself during Wednesday’s hearing in the Senate noting that, “They’ve decided that they are incapable of actually asking the questions of the Attorney General.”

Sanders explained that the Attorney General was willing to show up willingly to testify before the House on Thursday, but Democrats “changed the rules in the middle of the game” by taking a “special vote” on Wednesday to allow staff to question the attorney general.

“He’s a cabinet member for the President of the United States and this is a straight forward Oversight hearing, which members of Congress should be able to ask those questions. They shouldn’t need to stack that out. In fact, a number of these members are attorney’s themselves and should be perfectly fine [asking for themselves] without having somebody else do it.” She suggested. “It’s pathetic they can’t do their own job.”

Sanders also noted that it’s time to move on and that the Russia collusion delusion is over. (Continued Below)

“They can’t continue to drag this thing out and continue to put American people through this. There was no collusion, there was no obstruction and now they need to come together to work with this President to actually fix real problems. [Democrats] have to get to a point where they love this country more than they hate this President, and so far, we’re not seeing that at this point, particularly on what they’re doing on display today.” The press secretary said.

Sanders also tweeted on Wednesday, “AG Bill Barr served President George H.W. Bush honorably as AG and has done the same for President Trump. Democrats only disgrace and humiliate themselves with their baseless attacks on such a fine public servant.” (Continued Below)

AG Bill Barr served President George H.W. Bush honorably as AG and has done the same for President Trump. Democrats only disgrace and humiliate themselves with their baseless attacks on such a fine public servant.

(Related: Sen. Graham Steps In After Hirono Orders AG Barr To Resign: ‘You Slandered This Man From Top To Bottom’)