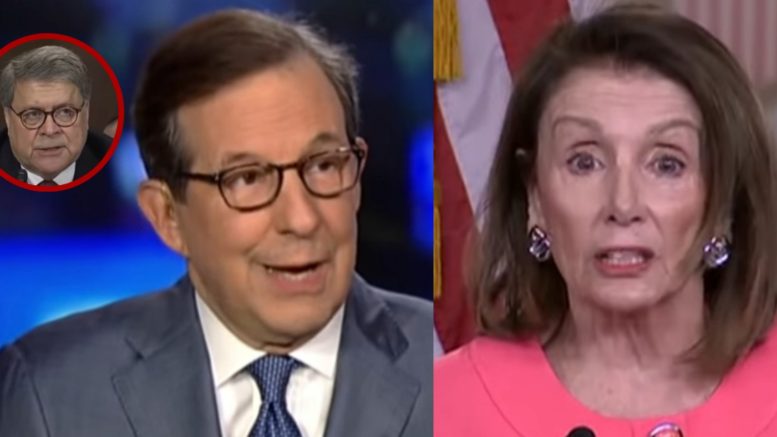 Chris Wallace reacted after Nancy Pelosi came out in a press conference and accused Attorney General William Barr of lying to Congress.

In regards to Barr, Pelosi said in a statement, “He lied to Congress. If everybody else did that, it would be considered a crime. Nobody us above the law–Not the President of the United States and not the Attorney General.”

Wallace initially responded by saying, “Alright, so what are you gonna do about it?”

Related Article: Sanders RIPS Nadler After He Changes The House Rules: ‘I Was Unaware That He Lost Confidence In Himself’

He added, “If you believe he lied to Congress, and more importantly, you say he committed a crime, what are you gonna do?” Video Below

Wallace went on to say that the White House and the Attorney General has made it pretty clear that they won’t be turning over many documents to Congress, and the President foreshadowed in his interview with Catherine Herridge that he won’t be allowing former White House counsel Don McGahn to testify.

He did say that they could sue the Attorney General and hold him in contempt. But even then, what is that going to do?

Wallace said, “You can take these steps, but do I think anything is gonna come out of it? Do I think someone’s going to arrest the Sergeant at Arms and Congress is gonna go and arrest the Attorney General? I suspect not.” Video Below