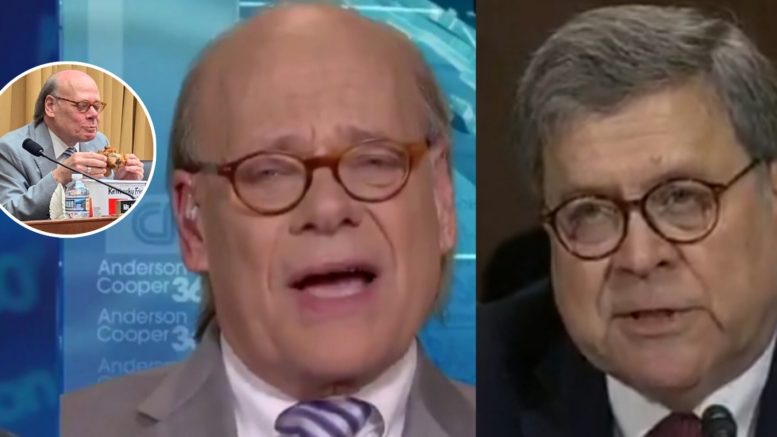 Rep. Steve Cohen (D-TN) spoke with host Anderson Cooper Saturday on CNN where he continued his attacks against the Attorney General.

This comes just three days after Cohen, one of the many House clowns in Congress, brought a prop chicken and a bucket of KFC fried chicken to the House Judiciary Committee hearing Thursday after Attorney General William Barr declined to appear for their circus show.

Cohen sat in his seat in the committee room Thursday and ate fried chicken, along with displaying a chicken prop over the seat Barr would have sat in if he had appeared before the committee.

On Saturday, Cohen threatened the Attorney General and called him a liar without stating what exactly Barr lied about. (Continued Below)

The anti-Trumper Congressman claimed of Barr on Saturday, “This is the most contentious conduct toward Congress we’ve ever had. He lied to Congress, he’s refused to attend. He’s tried to dictate the terms of Oversight.”

He went to claim that “staff” has questioned people before, however, he failed to mention those were actually investigations in the past. “It’s an adept way to question someone when you can follow up on your questions and not be cut off and be filibustered. He was afraid of it and that’s why he didn’t come.” Cohen whined.

Cohen also took to Twitter where he waged a threat against the Attorney General writing, “Barr has lied to Congress, refused to attend our hearing, & failed to comply with a subpoena. If he doesn’t provide the full #MuellerReport & underlying evidence by @RepJerryNadler’s monday deadline, we are prepared to hold him in contempt of Congress. #RuleOfLaw” (Continued Below)

Cohen knows that the Attorney General cannot release the full report because he would be breaking the law. Democrats think they are actually above the rule of law and can fool the American people with their demands.

On Thursday, ranking member of the Judiciary Committee, Rep. Doug Collins (R-GA) said, “The question I have here is not what is Bill Barr scared of. My question is what are the Democrats scared of? They don’t want Bill Barr here today. They’ve had the report, they’ve read it, they don’t like what’s in it. The Chairman won’t even go look at what the Attorney General offered him. It’s pretty amazing to me that he wants to go to exective session and ask questions about it, but he won’t even go read it.” Collins said.

In other words, the Attorney General has granted access to Nadler and other Democrats to view some of the redacted information in the Mueller report, yet they won’t even go look at it. They are grandstanding on public TV and during press conferences, suggesting Barr is hiding something, but in fact, the report is out. They know they’ve lost again, can’t face the music, and the tables are now flipped.

Don’t be fooled. These swamp rats are scared that the Attorney General is not cowering down or sleeping like former attorney general Jeff Sessions did. He is going to find out the truth for American people, and they can’t stand it. There’s a new sheriff in town. (Video Below)

Barr has lied to Congress, refused to attend our hearing, & failed to comply with a subpoena. If he doesn’t provide the full #MuellerReport & underlying evidence by @RepJerryNadler’s monday deadline, we are prepared to hold him in contempt of Congress. #RuleOfLaw pic.twitter.com/oqCTBDVOOo

We leave you with wise words from Rep. Doug Collins who said Democrats are making William Barr out to be the bad guy because their storyline was wrong: