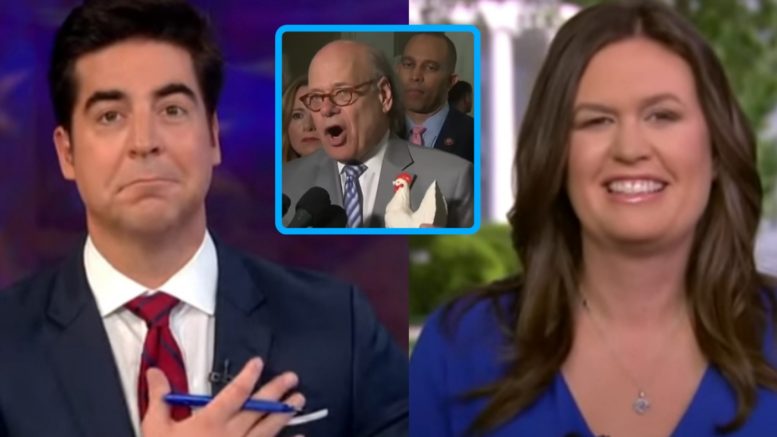 Jesse Watters brought on Sarah Sanders to get her reaction in regards to Democrats’ treatment of Attorney General William Barr.

Democrats are trying anything to discredit and belittle Barr, including accusing him of lying and using chicken props to help paint him as afraid to appear before Congress.

Watters declared that the left is “going nuts” likely because we now have an Attorney General that’s strong, and they don’t know how to deal with it.

Watters then pressed Sanders on her thoughts, which she began by actually correcting Watters’ prior remarks on the left.

After mentioning how she thinks Americans have grown tired of Democrat tactics, Sarah said, “Jesse, I do have one correction, though. And I hate to correct you on your show, but you said the left is ‘going nuts.'”

“The left has been nuts for a long time,” said Sanders, “particularly over the last two years as they’ve pushed this outrageous claim against the President.” Video Below

She then mentioned how Barr did a great job over the past week showing Democrats how ridiculous their claims are while hammering them during his testimony. She claimed the left is trying beat Barr up only because of his connection to the Trump Administration.

Related Article: Chris Wallace Reacts After Pelosi Accuses AG Barr Of Lying To Congress: ‘What Are You Gonna Do About It?’

Sarah concluded, “It’s truly sad to see the Democrats sink to this level. You think they can’t go lower and they always manage to do so.” Video Below