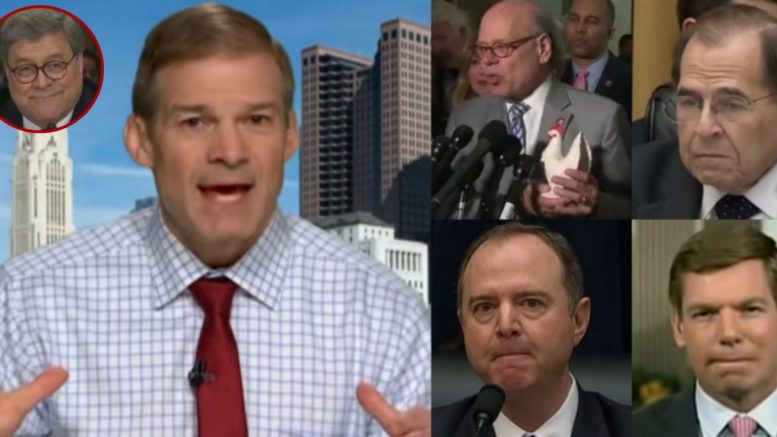 Ranking member of the House Oversight Committee, Congressman Jim Jordan (R-OH), joined host Maria Bartiromo on Fox News’ “Sunday Morning Futures” where he weighed in on Democrats and the Attorney General, who is going to dig deeper into the “spying” on President Trump’s 2016 campaign.

Jordan also accused the Democrats of committing obstruction of justice in their dealings with Attorney General William Barr.

During the interview, Rep. Jim Jordan said Democrats are nervous about the Attorney General talking about “spying” on President Trump’s 2016 campaign.

He explained four important key points that the Attorney General said: “First of all, he did, in fact, say spying did take place. Second, he said there is a basis for his concern that the spying wasn’t properly predicated. Third, he said there was a failure of leadership at the upper echelon of the FBI,” Jordan said.

“We know that for sure,” Jordan continued and listed off James Comey, Andrew McCabe, James Baker, Peter Strzok, Lisa Page and he noted, “We know there was a failure of leadership there.”

“And fourth, [Barr] used two terms that I’ve never really heard before and my guess is most Americans haven’t. He used the term ‘unauthorized surveillance’ and he used the term ‘political surveillance,'” The Ohio Congressman stated. (Continued Below)

Jordan went on to say that the Democrats are scared and then he switched gears to “obstruction of justice.”

Barr said he is “reviewing the conduct” of the FBI’s initial investigation into the Trump campaign in the summer of 2016 which caused a meltdown among Democrats after he confirmed that spying did occur within the Trump campaign. (Video Below)

Bartiromo said her sources told her that Nadler plans to mark up a resolution on Wednesday to hold Bill Barr in contempt. Jordan wasn’t sure if it was true, but he replied, “Probably so, these guys are determined to go after the Attorney General, to go after President Trump and not focus on what we need to to do to help the country.”

(Related: Swalwell Claims Trump Is A ‘Double Digit Obstructer’, Calls On Barr To Resign For Not Recusing Himself)