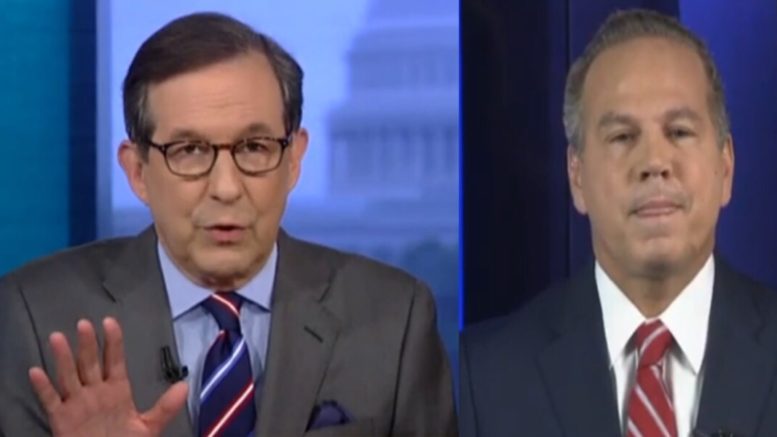 Rep. David Cicilline (D-RI) joined host Chris Wallace on “Fox News Sunday” where he peddled misinformation and ultimately was put in his place.

Wallace was direct with Cicilline where he exposed the Democratic Congressman’s hypocrisy along with also fact-checking him.

Chris Wallace, like him or not, stepped up to the plate on Sunday and held Rep. David Cicilline accountable by prying out answers with direct questions.

Wallace said on Sunday that House Judiciary Chairman, Jerry Nadler (D-NY) is giving Attorney General William Barr one more chance to comply with a subpoena or face sanctions. Nadler gave a 9 AM deadline by Monday to turn over a fuller version of the Mueller report as well as underlying documents.

Nadler knows the Attorney General cannot release the full report because he would be breaking the law. Democrats think they are actually above the rule of law but they can’t fool the American people with their demands. Further, Barr has granted access to Nadler and other Democrats to view some of the redacted information in the Mueller report, yet they won’t even go look at it.

Cicilline said on Sunday that if Barr doesn’t comply that Nadler and the committee will move forward with a contempt citation adding, “The members of our committee need to see the full report and the supporting documents so that we continue to do our work, [and] conduct Oversight in a responsible and sober way.” (Continued Below)

Wallace brought up when the House Republicans held the majority and voted to hold former attorney general Eric Holder in contempt of Congress for failing to turn over documents in the “Fast and Furious” case and also brought up when Cicilline walked out of the House floor in protest and said, “I declined to participate in these partisan political games…” further adding that it was “an abuse of power.”

Asked if he and Democrats are now involved in the same political games, Cicilline claimed that it is now “quite different” and tried to say that the Attorney General has refused to comply.

Wallace stopped him directly in his tracks as Cicilline was making excuses for Eric Holder and tried to spin the narrative. “In one case you said it was an abuse of power and [now] you’re going to support it.” (Continued Below)

The Fox News host went on to explain that the Attorney General declined to appear before the House Judiciary Committee on Thursday after Democrats voted to have “staff attorneys” ask questions of Barr and inquired, “When was the last time that a House committee demanded that staff lawyers interrogate a cabinet secretary?”

Cicilline said the last time “staff” was involved was during the Iran–Contra affair, which was in 1987, and then he noted Christine Blasey Ford, who testified before the Senate and also named Hillary Clinton during her email scandal. “The House rules permit this. The committee decides how we will examine witnesses and how we’ll collect evidence. A witness has no right to dictate to Congress how they’re going to be examined,” he suggested.

Wallace fact-checked Cicilline and said that Fox News asked the Judiciary Committee and confirmed that the last time that a House Committee demanded that staff lawyers talk to a cabinet secretary was 1987 during Iran-Contra, 32 years ago and also during Watergate. Wallace pointed out that Christine Blasey Ford was not a cabinet secretary.

“Wasn’t this an effort by the House Judiciary Committee to make the Russia investigation seem as bad and as serious and Iran-Contra and Watergate?” Wallace bluntly asked.

Cicilline claimed that he believes it is as bad and as serious. “The fact is the committee has the right to collect evidence in a way that we think is appropriate. And the reason it is so critical for the Attorney General is that he’s a master at evading. We decided it would be much more useful to get the evidence with a staff counsel having an extended period of time to follow up and really drill down, so the attorney general couldn’t evade answering questions as we saw him do in the Senate.” He said.

He also said that Barr is afraid and hiding. “What is he worried about? What questions is he afraid he can’t answer?”

Wallace interrupted him and declared, “Whoa, whoa, whoa, sir! In fairness, he was absolutely willing to testify before the committee, it was just this particular condition.” (Continued Below)

Cicilline blurted out whining, “But why Chris? You have to ask why. What is it about that?” Then Wallace shot back, “Maybe because of the fact it hasn’t happened in 32 years.”

Then, Wallace announced that Cicilline is on the record saying that the House should be prepared to imprison people held in contempt of Congress. “Are you really serious that you’re going to go down and arrest the Attorney General?” He asked.

Cicilline said that Congress has to take this in a “deadly serious way” adding that they have several ways to enforce a subpoena. “The first is to adjudge someone in contempt and initiate a civil proceeding. Congress also has the adherent authority to adjudge people in contempt,” he added.

When asked about the “spying” if his committee will investigate, Cicilline filibustered and said that the information is already laid out in the Mueller report. Then he changed the subject and listed what the Democrats ran on, naming off things such as healthcare, raising family income, and infrastructure.

Lastly, Wallace pressed about Robert Mueller testifying before the Judiciary Committee and if he has agreed to testify and whether a date has been set.

Cicilline said, “A ‘tentative date’ has been set for May 15th, and we hope the special counsel will appear. We think the American people have a right to hear directly from him. I think the representative for the special counsel has [agreed] but obviously, until the dates comes, we never have an absolute guarantee.” (Video Below)

After his interview, Cicilline backtracked and wrote on Twitter, “Just to clarify: we are aiming to bring Mueller in on the 15th, but nothing has been agreed to yet. That’s the date the Committee has proposed, and we hope the Special Counsel will agree to it. Sorry for the confusion.”

Just to clarify: we are aiming to bring Mueller in on the 15th, but nothing has been agreed to yet. That’s the date the Committee has proposed, and we hope the Special Counsel will agree to it. Sorry for the confusion. https://t.co/FfR8ReLmkp

(Related: Three Days After His Chicken Stunt, Rep. Cohen Threatens AG Barr For Not Complying: ‘We Are Prepared To Hold Him In Contempt’)