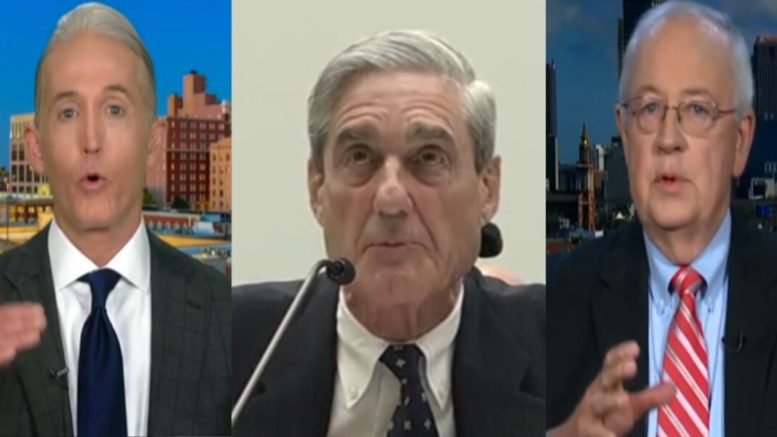 This comes as a “tentative” date of May 15th has reportedly been set for Mueller to testify.

During the interview, Trey Gowdy and Ken Starr explained what Mueller can and cannot say publicly if he testifies before the House committee as it relates to standard DOJ policy.

Asked if Robert Mueller should testify, Gowdy said, “It’s going to be hard, he’s not going to have a lot to say, because DOJ policy does not allow him to discuss derogatory information against an uncharged person.”

He explained that the Democrats want Robert Mueller to “painstakingly go through all of the information he had that led to obstruction or that they think leads to obstruction, and the conclusion is: he didn’t indict him.” Gowdy added, “So, DOJ policy doesn’t allow that conversation; I’m not sure what else he can talk about.”

Gowdy clarified that even some of the “unredacted information” Mueller cannot discuss by law. “Even what is unredacted, the Department of Justice policy is: you cannot discuss derogatory information against someone you did not indict. The Department doesn’t speak in press conferences and reports. They use indictments. So either, indict or shut up! And he didn’t indict.” He said. (Continued Below)

Kenn Starr said that Robert Mueller had his opportunity to indict but now, he has to stick with his report. “He can’t have a ‘latter-day inspiration’.”

Starr pointed out that the President has the authority, through executive privilage, to stop Mueller from testifying. “I doubt that’s going to happen. I don’t think the President is going to cross his own attorney general.”

Starr added that Robert Mueller has to stay with what he has written. “Let’s face it, the name of the game is now: do we impeach? This is what the House of Representatives is all about and that has to be book 2,” he said. (Continued Below)

The subject changed to impeachment and Gowdy referenced it as the “political death penalty.”

“You need to be very careful when you use or how you authorize the use of what is tantamount to the political death penalty. [Democrats] are not going to succeed, the jury is not going to go along. This is about fundraising and placating in your base.” Gowdy suggested.

(Related: Three Days After His Chicken Stunt, Rep. Cohen Threatens AG Barr For Not Complying: ‘We Are Prepared To Hold Him In Contempt’)

After Mueller’s letter leaked the night before William Barr testified, Starr said that Mueller deserves the sharpest criticism for “sandbagging” the Attorney General.

“His letter that was then leaked on the eve of Bill Barr’s testimony was essentially, I believe, an unfair, whiny complaint. That is to me the unforgivable sin. Bob Mueller badly injured this Attorney General and [he] didn’t deserve that.” (Video Below)