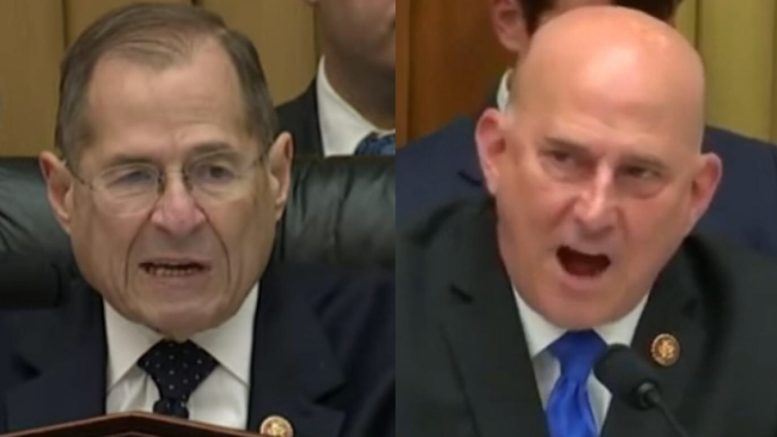 Rep. Nadler scheduled the congressional contempt vote on Wednesday and all Democrats that were present voted to hold William Barr in contempt of Congress in the contempt resolution.

Rep. Louie Gohmert (R-TX), during his opening, countered in a debate, and he ripped the House Judiciary Democrats over holding the Attorney General in contempt.

He began by explaining that he is hearing “mourning” from his Democratic colleagues across the aisle and suggested that it “once used to be a great Judiciary Committee.” (Continued Below)

He pointed out that there use to be concern among Democrats about “too much power within the FISA courts through the patriot act” and noted that Republicans shared the same concerns. “And now, this committee majority is on the wrong side of a very important historic time,” he said.

Gohmert recommended that the committee should “be all over that” in finding out the truth. “We ought to be demanding answers from the FISA judge or judges, who were either A: content to have fraud committed against their courts, or were complacent,” he said.

“Maybe it was Peter Strzok’s buddy that he bragged about in his texts that was going to be the FISA judge that signed warrants where there was no probable cause of anything. This was an attempted coup and history is bringing that into focus more and more clearly,” he continued.

He asked, “And what does this committee do about the abuses, the attempted coup? It comes in and decides we’re gonna go after the Attorney General, who’s trying to clean up the mess! Christopher Wray sure hasn’t! (Related: Bongino Reacts After Wray Disagrees With The Use Of The Word ‘Spying’: ‘He Showed Us All His True Colors’)

Gohmert suggested that FBI Director Christopher Wray has covered up for Hillary Clinton and the Deep State. “Instead of asking from the intel agency, let us see the 100% certain proof that you have that Hillary Clinton’s personal server was hacked, by China– no he covers it up and says ‘no’ we still haven’t seen it,” he said. “There is a disaster that has occurred in our justice system and this committee has oversight responsibilities and we are abusing those.”

He went on to say that “this motion for contempt is not being done in good faith, the Texas Congressman said. “The truth is, we know that this committee majority is not acting in good faith. How? Because they’re moving for contempt for an Attorney General failing to turn over material that this majority, at least some, maybe it’s just the staff, but some people know that you can’t hold someone in contempt for failing to produce things that are illegal for you to produce.” (Video Below)

“You’re on the wrong side of history and there is no joy here in seeing the abuses. I hope and pray literally for the day when we can join forces and quit trying to push this idea of an attempted coup and uncover the abuses that have truly gone on,” Gohmert concluded.