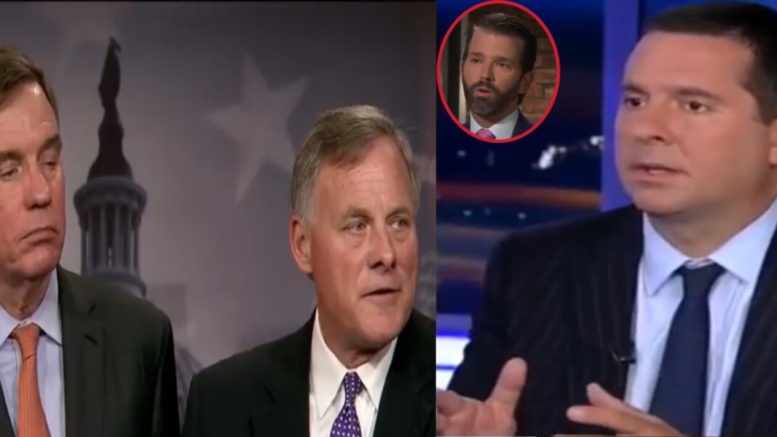 On Wednesday, the Senate Intelligence Committee subpoenaed Donald Trump Jr. to answer questions about his previous testimony before Senate investigators in relation to the Russia investigation.

The fact that they’re subpoenaing Trump Jr. is a strong signal that he declined a request to appear before the committee again, reported Axios.

“I’m assuming, because the Senate numbers are so tight and so close, with Republican versus Democrats. In the House, it’s whoever has the gavel has all the power. In the Senate, they have to have some type of agreement,” Nunes began.

Nunes went on to say that he believes they want to bring Trump Jr. in to see if he will keep the same story, or admit to whether or not he talked to his father about the “Trump Tower meeting.”(Continued Below)

Nunes said he is frustrated about the Trump Tower meeting because it was “Fusion GPS Russians.”

“What’s frustrating about the Mueller report, nobody seems to be getting to the bottom of Fusion GPS’ involvement in the Trump Tower meeting,” he said.

The California Congressman said his guess is that Sen. Mark Warner (D-VA), wants Don Jr. to testify to close the Senate report out. (Continued Below)

President Trump responded on Thursday and said, “I was very surprised. I saw [Chairman Richard] Burr saying there was no collusion two or three weeks ago. I was very surprised to see my son—my son is a good person, he works hard. The last thing he needs is Washington, D.C. He’d rather not be involved.”

“My son is a good person. He testified for hours and hours. My son was totally exonerated by Mueller who doesn’t like Trump, me,” Trump continued. “And for my son, after being exonerated to now get a subpoena to speak again after telling everyone about a nothing meeting, I’m pretty surprised.”

(Related: Nunes Reveals The Key Component Of the ‘Mueller Dossier’ He’s Now Focusing On: ‘We’re Calling Him Out’)