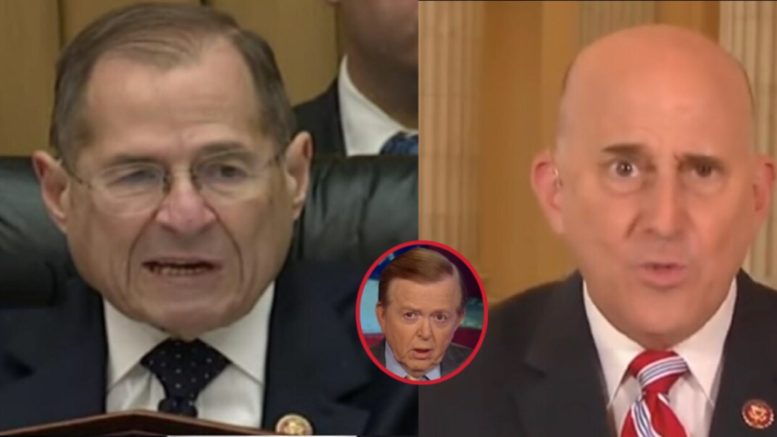 Rep. Louie Gohmert (R-TX), joined host Lou Dobbs on Fox Business Thursday, where he weighed in on the aftermath of the released Mueller report and Democrats who voted who hold Attorney General William Barr in contempt of Congress.

Gohmert is fed up with the Democrats’ shenanigans since President Trump has taken office, and he noted that we are finding out more of the dirty tactics Democrats used before Trump’s election, to keep him from becoming President, and then, to overthrow him.

“We’ve talked for a long time about approaching a constitutional crisis, we are now in it,” Nadler claimed.

Gohmert responded to Nadler’s claim and said, “You don’t find me agreeing with Jerry Nadler and Speaker Pelosi, but I do agree. There is definitely a constitutional crisis and it has everything to do with that attempted coup by leaders in the FBI, the DOJ, apparently in the intel community.”

He pointed out that former FBI agent Peter Strzok and former FBI lawyer Lisa Page’s text messages uncovered that former president Barrack Obama wanted to know “everything that was going on.” Gohmert added, “You can thank President Obama, [because] he’s the one who set this whole thing in motion.” (Continued Below)

The Texas Congressman continued, “It is outrageous and somebody, hopefully, a bunch of bodies, have got to be held to account or this will not stop!” He declared. “If people don’t go to prison for bringing this little experiment in self-government to the brink of disaster, then we’re not going to last much longer. It’s that serious.”

(Related: Rep. Gohmert RIPS Judiciary Dems On Holding Barr In Contempt: ‘You’re On The Wrong Side Of History’)

Dobbs suggested that Democrats stole the 2018 Midterms because they essentially used the Mueller investigation to their advantage. Robert Mueller knew over a year ago there was “no collusion” between the Trump campaign and Russia, but dragged it out anyway. (Video Below)