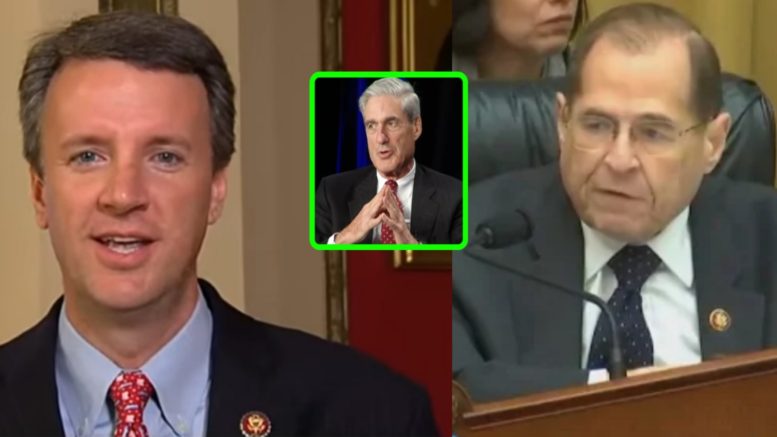 On Friday, House Judiciary Chairman Jerry Nadler announced that Special Counsel Robert Mueller would not be testifying next week.

Nadler told reporters that negotiations among committee members are still in the works regarding Mueller’s testimony, but he would not give a specific reason why it won’t take place next week.

Republican Congressman Ben Cline, who is also a member of the House Judiciary Committee, gave a solid reason why he thinks Democrats may now be nervous and worried about the prospects of a Mueller hearing.

He said, “I do think the Democrats are realizing that if Mueller is given the opportunity to testify, that our side is gonna have just as many questions as their side.”

“And our side is going to be asking how this came to pass, how the FISA warrants got issued,” Cline continued, “what evidence they had in addition to the Steele Dossier.”

He added, “I think there is a lot more than just the Mueller Report that is going to be talked about when Bob Mueller testifies.” Video Below

Cline brought up how earlier in the day, it was discovered that Christopher Steele had a meeting with State Department officials who found red flags in the dossier that questioned its credibility.

Related Article: Meadows & Jordan Reveal The Reason Why Nadler & Others Are Going Crazy: ‘They Know The Truth Is Coming Out’

And it now brings question as to why the FBI pushed forward using the Steele Dossier in the FISA application process, which ultimately led to spying on the Trump campaign. Video Below