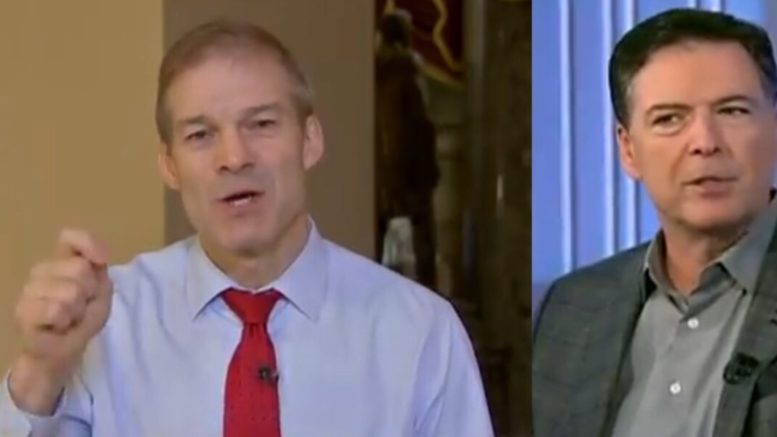 Congressman Jim Jordan (R-OH), interviewed with host Bill Hemmer on Fox News Friday where he weighed in on former FBI Director, James Comey, and his latest notion that spying did not occur.

During the town hall, James Comey said that “the FBI doesn’t spy, the FBI investigates”.

Attorney General William Barr said that he believes “spying” did occur. Comey played dumb when asked about Barr’s statement and responded, “I can’t explain it. The only explanation I can think of is because the President uses it?”

Rep. Jordan fired back at Comey’s comments and said, “We know that spying took place, we know two instances.”

He further explained, “One, they went and got a warrant from the FISA court, the now famous dossier was the basis for that warrant to go spy on the other parties campaign. The dossier was an opposition research document from the Clinton campaign, and they didn’t tell the court about important facts about the dossier– like who paid for it: the Clinton campaign. Christopher Steele the guy who wrote it was ‘desperate to stop Trump’, had communicated that to the Justice Department.” (Continued Below)

Jordan listed the other instance, “We know just last week, The New York Times has the report where they planted someone posing as someone else to go after George Papadopolous, to set him up.”

Jordan added, “If that’s not spying, I don’t know what is. To get in this fight over a warrant makes no sense.”

During the CNN town hall, Anderson Cooper asked Comey how much work did the FBI do to verify the dossier, Comey responded, “There were a lot of spokes off of that. We didn’t know what was true and false, but we were trying to figure out what to make of it.” (Continued Below)

The Ohio Congressman shot down Comey’s nonsense and said, “Andy McCabe told us that when we deposed him that but for the dossier they would not have gotten the warrant. So the idea that they used it– James Comey’s own words ‘salacious and unverified’ when they took it to a court, a secret court, to get a warrant to spy on Carter Page, who was associated with the Trump campaign.”

(Related: Comey Calls It ‘Totally Normal’ To Plant An Agent In A Campaign, Bongino Reacts: ‘Comey Is A Snake’)

Comey, during the town hall, also said that he believes the Inspector General will find nothing inappropriate. “At least not that I know of,” he claimed.

“What I know is the last time the Inspector General did a report, he came back and said Andy McCabe, Deputy Director of the FBI, lied three times under oath. We’ll see what Michael Horowitz brings to us in the next 4-6 weeks,” Jordan noted.

Asked if his committee has the power to bring back James Comey or if there is a sense that Democrats want to do that, Jordan answered, “They haven’t talked about that. They’ve been so focused instead, on trying to go after Bill Barr, because they know Bill Barr is going to get to the bottom of all of this.” (Video Below)

(Related: Jim Jordan Makes His Case On Why Exactly Dems Are Trying So Hard To Destroy Barr: ‘Dems Are Nervous He’s Gonna Get To The Bottom Of Everything’)