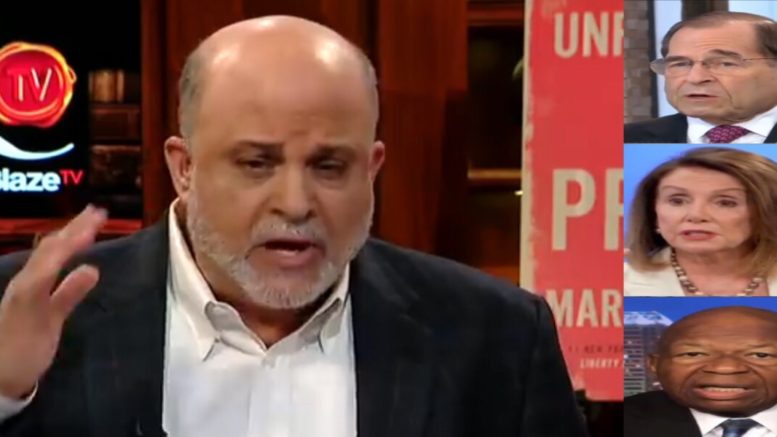 Mark Levin, “The Great One”, joined host Sean Hannity on Fox News Thursday where he weighed in on the FISA scandal and Democrats’ inability to accept the outcome of the Mueller report.

Levin went into detail and explained that former FBI officials should be subject to the “Donald Trump treatment,” with a grand jury hearing impaneled from the “whole cabal” and assigning a new special counsel.

“The whole cabal should be giving testimony. They should get a little bit of their own medicine. There should be a criminal grand jury and we should have either a special counsel or a United States attorney take charge of this case and get to the bottom of it,” Levin suggested.

“Put these people under oath and let them get the Donald Trump treatment. We want all their documents, no privileges, nothing. Drag them in and maybe drag their kids in too,” he said.

Levin said that House Democrats’ goal is to impeach Trump if they can find the evidence, but in the meantime, they are attempting to drive down his popularity. (Continued Below)

Levin railed against House Speaker Nancy Pelosi (D-CA) and suggested that she is a “constitutional illiterate.” He wonders why no one ever asks about the sources of the wealth of Pelosi and her husband, San Francisco real estate developer and financial investor Paul Pelosi.

“How did the Pelosi’s make their money. Who do they know? Are there any foreign interests? Have we seen their bank accounts? Have we seen their tax returns? I’d like to know about all their connections, how they got so rich,” he said, accusing Democrats of an “attack” on President Trump and his family to eventually impeach him.

Levin listed off a number of smears against the President and explained why they are doing it. (Continued Below)

Levin said that the committee Chairmen are “meeting in dark” in some shadowy room trying to figure out how to bring down the President of the United States and embarrass him.

“Let me tell you what’s going on: This is a Democrat party cabal trying to reverse the 2016 election, trying to disenfranchise 63 million voters, mostly Republicans, and Independents and some Democrats led by a Speaker of the House from San Franciso, a Chairman of the House Judiciary Committee from New York [Jerry Nadler], the Chairman of the Oversight Committee from Baltimore [Elijah Cummings]. Three or four blue cities [are] trying to change the course of this country, trying to reverse the course of the election.”

Mark Levin concluded that Democrats are playing with “political fire” and that millions of people are not going to stand for this.

(Related: Meadows & Jordan Reveal The Reason Why Nadler & Others Are Going Crazy: ‘They Know The Truth Is Coming Out’)