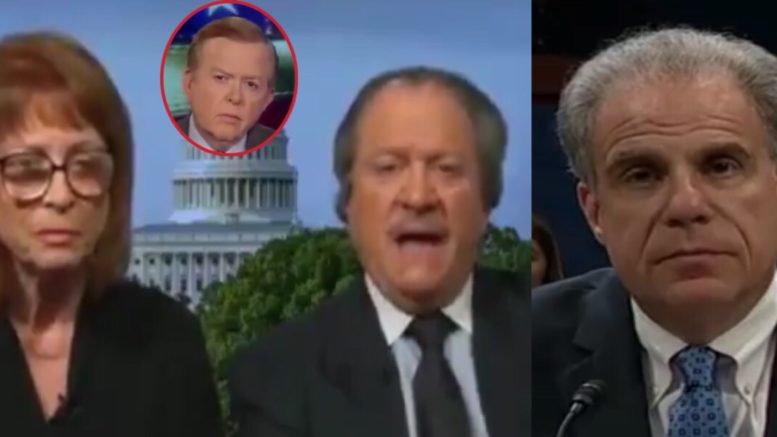 Thursday, attorneys Joe diGenova and Victoria Toensing joined host Lou Dobbs on Fox Business where they weighed in on the Department of Justice’s watchdog, Inspector General Michael Horowitz, and his upcoming report.

Horowitz has been investigating the FBI’s 2016 “spying” activities and his report is said to be expected later this month or in early June.

Joe diGenova believes that the Inspector General has determined that “the final three FISA extensions were illegally obtained,” and the first one is still being investigated.

“The only question now is whether or not the first FISA was illegally obtained,” diGenova explained.

He told Dobbs that the latest revelations arise as investigative reporter John Solomon wrote an article that has prompted a further investigation from Horowitz’s team.

Solomon reported that newly unearthed memos explain State Department official Kathleen Kavalec’s notes showed the opposition research firm, Fusion GPS, led by Glenn Simpson and Peter Fritsch, were deeply involved. Further, she met with former British spy Christopher Steele in October of 2016, and Steele was doing it for “political purposes”. Kavalec knew the information that Steele was providing to her was “false on its face”, and she knew that Steele was trying to leak the information to media sources before the November election.” (Continued Below)

diGenova said the inspector general was unaware of the memos, which were obtained last week through open-records litigation by the conservative group Citizens United.

“The Bureau hid those memos from Horowitz. As a result of that, they are doing some additional work on the first FISA. It may be that all four FISAs will have been obtained illegally,” he explained.

diGenova and Toensing shared another explosive revelation on Sebastian Gorka’s Salem Radio talk show “America First” on Thursday. According to Toensing, the FBI tried to frame former Trump campaign adviser George Papadopoulos by having an informant give him $10,000 in cash during a trip to Israel in the summer of 2017, per PJ Media. (Videos Below)

Watch the explosive clips below:

Joe Digenova shared the conclusion of the OIG report on FISA abuse today on @LouDobbs – because of the recently uncovered information from the FOIA release and John Solomon today, he is now having to add and investigate that. Thanks for the clip @detachedaz pic.twitter.com/e8ihB4h2Wr

Joe diGenova and Victoria Toensing explain how the FBI used $10,000 to try and set up George Papadopolous in a blatant sting:

Joe diGenova and Victoria Toensing explain how the FBI used $10,000 to try and set up @GeorgePapa19 in a blatant sting. Incredible corruption! https://t.co/oztegHjFhI