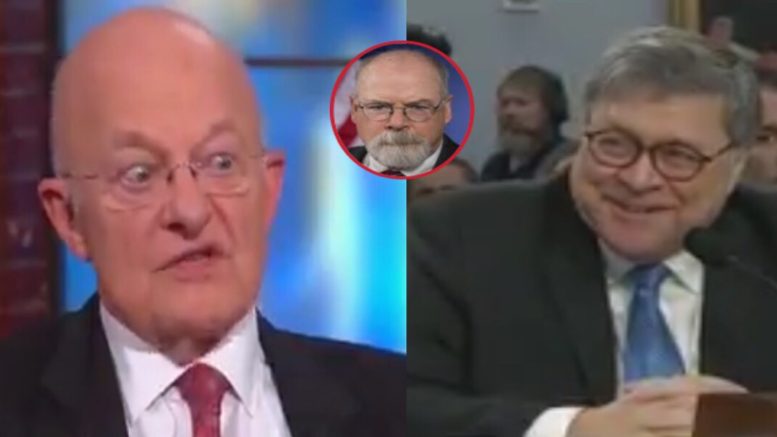 Attorney General William Barr has officially made good on his promise and appointed a U.S. Attorney to investigate the origins of the Russia investigation to determine if the FBI’s “spying” on the Trump campaign in 2016 was adequately predicated.

Barr appointed John Durham, the U.S. attorney in Connecticut, to conduct the inquiry.

In an interview on CNN, host John Berman asked former Director of National Intelligence James Clapper about Barr appointing Durham for the job to investigate how the “FBI Russia Investigation started”.

“Do you think this kind of investigation is warranted?” Berman asked Clapper.

Clapper responded, “Well, I guess you’re going to have to stand in line to take a number to do an investigation of the investigators.”

He added, “There’s already one substantial investigation, which as I understand it, is nearing completion, being conducted– led by the Justice Department Inspector General. So if it were me, I’d wait for the outcome of that to determine if there need be yet more investigations. But now, we’re starting more investigations before that one is completed.” (Continued Below)

Clapper claimed, “We’re losing sight of what was the cause of all of this– the predicate for all of this– was the Russians!”

Napolitano further noted that the statute of limitations for crimes is 5 years. In other words, the swamp is trying to buy time to cover up their crimes, but Barr is wasting no time. There’s a new sheriff in town. (Video Below)

Related: Gowdy Advises Where To ‘Look’ After Barr Assigns Durham To Investigate: ‘Look For Emails Between Comey & Brennan in Dec 2016’)