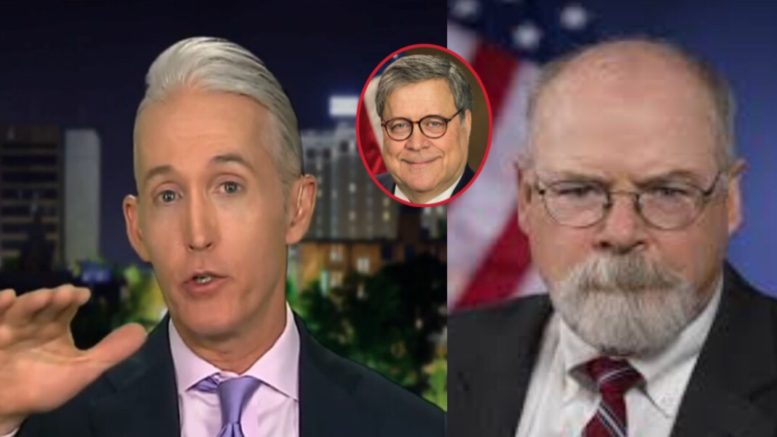 Attorney General William Barr has officially made good on his promise and appointed a U.S. attorney to investigate the origins of the Russia investigation to determine if the FBI’s “spying” on the Trump campaign in 2016 was adequately predicated.

Barr appointed John Durham, the U.S. attorney in Connecticut, to conduct the inquiry.

The inquiry will focus on whether the government’s methods to collect intelligence relating to the Trump campaign were lawful and appropriate. Durham has previously investigated law enforcement corruption, the destruction of CIA videotapes and the Boston FBI office’s relationship with mobsters, according to AP.

“I am reviewing the conduct of the investigation and trying to get my arms around all the aspects of the counterintelligence investigation that was conducted during the summer of 2016,” Barr said. (Continued Below)

After the news broke, former South Carolina Congressman, Trey Gowdy interviewed with host Sean Hannity where he weighed in and explained what answers he wants.

“This is the 4th person charged with investigating the origins of the Russia probe. I’m more interested in how quickly they do it and how effectively they do it more than the numbers. If this is the right person to do it, more power to them,” he stated.

Gowdy explained that there is an easy roadmap to follow and clarified. “I want to to know the origins of when the bureau began to intermingle the Trump campaign with the Russia probe,” he said. (Continued Below)

He went to ask, “How did the FBI assess Christopher Steele? They had their own internal document. It’s part of what [Sen. Lindsey Graham] wants to make public are the internal FBI documents where they did there own assessment. And I think you’ll be surprised at whether or not they viewed Steele as being credible.”

It was recently revealed through a Freedom of Information Act request that Steele met with then-State Department official Kathleen Kavalec ten days prior to the issuance of the initial Carter Page FISA warrant and told her that he was “keen to see this information [the dossier] come to light prior to November 8,”  the date of the 2016 presidential election.

Asked if he believes former Attorney General Loretta Lynch and FBI agents rigged Hillary Clinton’s investigation, Gowdy said, “I am convinced that they handled that investigation in a way, unlike any investigation I have ever seen handled before.”

On the question of Hillary deleting 33k emails, using Bleachbit, and hammers, Gowdy noted, “It is fantastic evidence on the issue of intent, which is what Comey said he didn’t have. It is consciousness of wrongdoing, it is knowledge. In addition to all of that, it is multiple misstatements, monstrously false statements she made about her handling of it.” (Continued Below)

Next, Hannity asked Gowdy if there was a fraud committed against the FISA court by withholding that Hillary Clinton paid for the dossier and that the bulk of the evidence was unverifiable, untrue, and used to spy on the Trump campaign.

“Sean, I can tell you it is even worse than what you described. It is what you described, in addition to withholding exculpatory information. They made no effort to corroborate the dossier until after it had been used in the application and a renewal. Whoever is investigating this, tell them to look for emails between Comey and Brennan in December 2016!” He suggested. [Emphasized]

Asked if he thinks they used the phony dossier to undo a duly elected President of the United States and take him down, Gowdy fired off:

“I’m just going by what Peter Strzok said. He thought he’d be the lead agent of investigating this–said he thought Trump would be destabilizing, had an insurance policy, and then promised his lover that he will stop it. So, you answer it.” (Video Below)