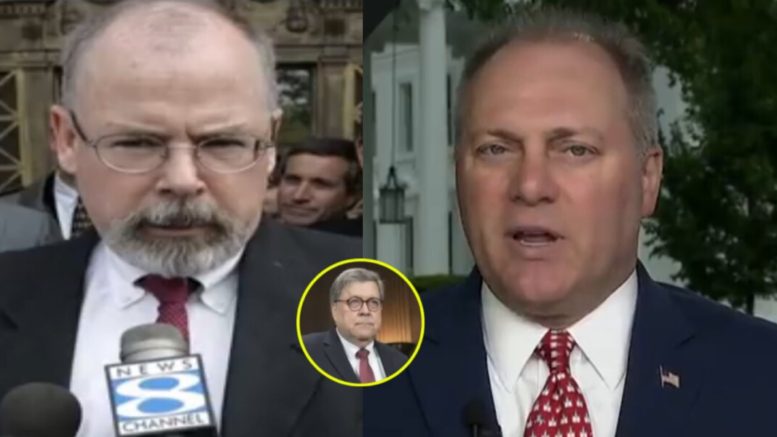 This comes after Attorney General Will Barr appointed John Durham, the U.S. attorney in Connecticut, to conduct the inquiry into the origins of the Russia investigation and to determine if the FBI’s “spying” on the Trump campaign in 2016 was adequately predicated.

Steve Scalise said on Monday that the move by the Attorney General to appoint John Durham means that he’s serious about cleaning house within the FBI and dealing the bad actors.

“There are some people over there, most of the FBI we know do great work for our country, but there were some that were politically motivated and they were carrying out their job not in what was best for the country, but what was best to pursue their own political agenda. There’s absolutely no place for that within the FBI,” Scalise explained.

Asked it if was an easy road map to figure out how everything started, Scalise said, “I know we’ve laid out a lot of it in the investigations that we’ve done. I saw a lot of that work and we did some of those reports. It was very disturbing when you look at the use of the FISA court– when you look at the very nefarious nature about which this entire investigation started.”

“It was clear that there [were] some people over there at the FBI that didn’t want Donald Trump to be elected President and they were using their position to try to stop him. That can not be tolerated in America. This is not how we run our country,” he added. (Continued Below)

Scalise said he doesn’t personally know U.S. Attorney John Durham but that “he’s heard good things about him.” He added, “I just hope he carries out his job and follows the facts where they lead.”

On Monday night Trey Gowdy said during an interview with Sean Hannity that he wants to know “the origins of when the bureau began to intermingle the Trump campaign with the Russia probe.”

Asked if he thinks the “spying” happened before 2016 and in response to Gowdy’s statement, Scalise said, “We’ll find out when it happened, but we knew there were a lot of communications with political entities. The Democrat party was behind some of the information that was gathered, that was the basis for the investigation, and yet, that wasn’t presented to the FISA court the way it was supposed to be.” (Continued Below)

Scalise noted that all of that information needs to be looked into because it is “clear abuses of power”.

“They don’t want to see witch hunts and they don’t want to see the federal government using its power in a way to go after and target American citizens, especially a candidate for the President of United States because they disagree with that person’s political views. That goes against everything our country was founded on,” Scalise explained.

Asked if he thinks the Trump administration is going on an offense in a legal sense, Scalise responded, “I think you’re seeing the Justice Department go on offense to say ‘let’s clean up the bad apples.’ If there are bad apples within the organization, they need to be cleaned out.” (Video Below)

Scalise  concluded, “And let’s go restore the integrity of the good work of the men and women of the FBI and the job they do for our country and make it clear that if you want to go to the FBI or any intelligence agency, you’re there to go and defend and represent this country, not to carry out your own political agenda.”