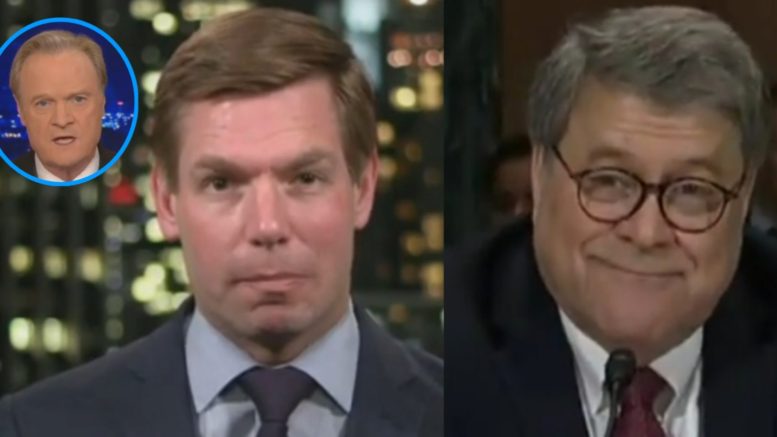 Democrat Congressman and Presidential hopeful, Eric Swalwell, is no longer hiding his ambitions to one day impeach President Trump.

But first, Swalwell says Attorney General William Barr is his primary target along with Secretary of Treasury Steve Mnuchin as a secondary target before Trump can be impeached.

In a recent interview with MSNBC’s Lawrence O’Donnell, Swalwell said, “We’re on the road to impeachment. There’s no doubt about that.”

Swalwell thinks the only obstacle that stands in the way of Democrats and evidence to hold Trump accountable is a “wall of obstructors.”

He said, “I’m suggesting that the best way to hold the President accountable is to start getting rid of, brick by brick, those obstructors.”

“That starts with Bill Barr,” Swalwell continued. “We’re gonna hold him in contempt in the full house. I think we should move to impeach him.” Video Below

Swalwell went on to say that he thinks Mnuchin is “probably next” since he is not handing over Trump’s tax returns.

Finally, Swalwell hinted that there is a long, difficult road ahead before impeaching the President is possible as he concluded, “It’s not going to happen as fast as it probably needs to. But I think we want to make sure we’re on solid ground as we go to the courts and seek this evidence and show that that we exhausted all of these remedies. And that the President left us no other choice.” Video Below

We're on the road to impeachment. We don't want to be here, but we need to hold Trump accountable.