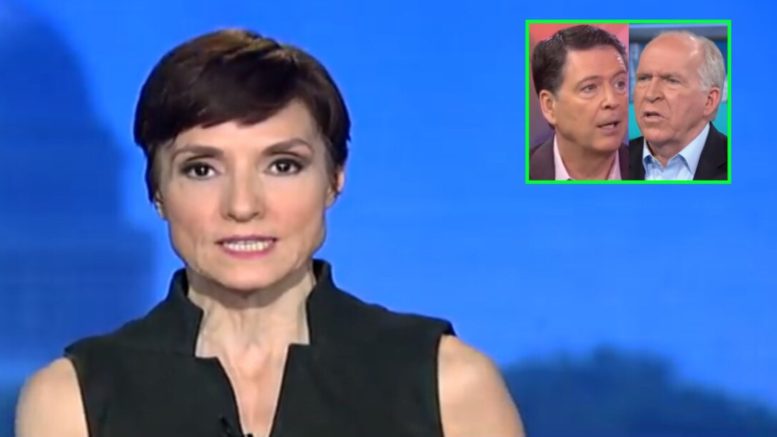 Fox News’ Chief Intelligence correspondent, Catherin Herridge exposed former Obama officials are now turning on each other in the wake of the Steele dossier.

A dispute is erupting over which government official pushed the unverified dossier into “Russia meddling” at a time when the Justice Department is investigating how government agencies handled the dossier that Christopher Steele wrote and the Clinton campaign and DNC funded.

Catherine Herridge reported that in an email chain, former FBI Director James Comey told bureau subordinates than then CIA Director John Brennan insisted the dossier be included in the intelligence community assessment on Russian election interference, known as the ICA.

She further noted that according to sources, the email chain referred to the dossier as “crown material.”

On Tuesday night, former Oversight Committee Chairman, Trey Gowdy, spoke with Martha MacCallum where he said that he’s seen the document adding that, “Brennan and Comey right now, the only thing they seem to share is a hatred for Donald Trump. It’s gonna be interesting if they begin to turn on one another.” He also suggested, “Comey has a better argument than Brennan, based on what I’ve seen.”

Catherine said in a statement to Fox News, however, a former CIA official put the blame on James Comey. (Continued Below)

The statement reads, “Former Director Brennan, along with former [Director of National Intelligence] James Clapper, are the ones who opposed James Comey’s recommendation that the Steele Dossier be included in the intelligence report.”

Earlier that day, Clapper’s office had released the ICA, which asserted the Russian government was behind hacks of Democrats during the campaign. (Continued Below)

Comey told lawmakers in his Dec. 17 interview that information from the Steele dossier was included in an appendix to the ICA. After the main briefing, Comey met with Trump one-on-one to tell him about a bombshell claim made in the dossier: that the Russian government had video of Trump with prostitutes in Moscow.

Comey claims he told Trump the information was unverified and that he did not necessarily believe it was true. Trump denied the allegation during the Comey meeting and in days after the dossier was published.

Comey also told lawmakers on Dec. 17 that he recalled a discussion with Brennan about whether parts of the dossier should be included in the body of the ICA or in an appendix. When asked by Gowdy in that interview about his email to staff members, Comey said it was “possible” he sent an email but that he did not specifically recall. Gowdy then referred to the email, asking about the “crown material” reference and telling Comey that he had used the word “unverified” to describe the dossier.

Comey and Gowdy did not discuss in the interview whether Comey told FBI staff that Brennan wanted the dossier cited in the ICA.

Comey also testified that it was Clapper who made the final decision that the FBI chief would have the one-on-one briefing with Trump.