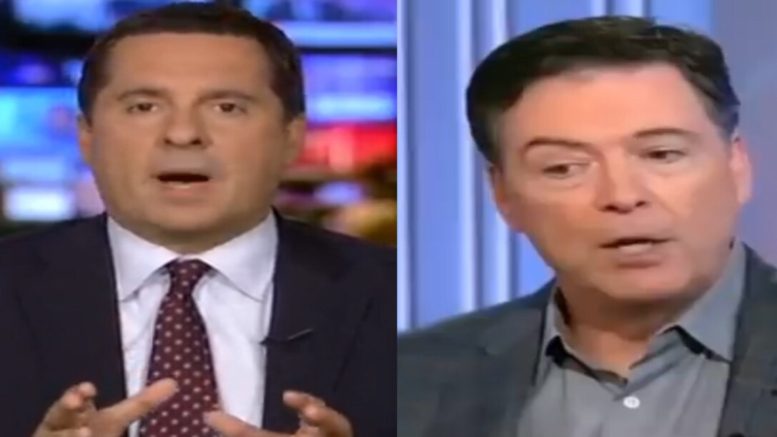 Ranking member of the House Intelligence Committee, Devin Nunes (R-CA), joined host Sean Hannity on Tuesday where he weighed in on FISA abuse, the Steele dossier, and unreliable information that sparked the Russia investigation.

Nunes went into detail about the classified information he wants to be released that will expose the misuse of the dossier and how it was used.

During the interview, Rep. Nunes explained there are two “tranches” of information he’s looking for: exculpatory evidence on George Papdopolous that rests at the FBI, and the second is the FISA application.

“On the FISA application, remember you have Comey, who has called this a mosaic, so ‘Comey’s mosaic.’ Remember when we came out with our memo that brought forward the fact that they had used the Clinton paid for the dossier, the dirt, the opposition research? Then, they had leaked that to press outlets, then they picked up those press reports and used it in the FISA application,” Nunes stated.

Comey called this a “mosaic” and said there is more information on it.

“There is more information that we think is equally as bad as using opposition research,” Nunes said. (Continued Below)

Asked if the bulk of the FISA application came from the Steele dossier, Nunes responded, “It is the bulk, but remember what we believe the rest of it is that fills out ‘Comey’s mosaic’ is actually the true definition of the ‘insurance policy’.”

“Remember the talk of the insurance policy by [Peter] Strozk and [Lisa] Page on the text messages? We believe that insurance policy is not just about investigating the Trump campaign. We believe it is to ensure that they were able to get the FISA warrant on Carter Page so they could go in and look at all the emails on the campaign,” Nunes revealed.

He added, “We’ve been living for three years with the perverted fantasies of Glenn Simpson, and the Clinton campaign talking about pee-tapes. And supposedly reporters were all over looking for these pee-tapes… this is really gross stuff.” (Continued Below)

Nunes noted that at some point the FBI and Fusion GPS intertwined and they were working together on the dirt against Trump, adding “I think that’s what U.S. Attorney Durham is supposed to get to the bottom of.”

“There’s a whole lot of things that don’t make sense about this, but there is one thing we know for sure because of this revelation— is that the FBI did, in fact, know that Christopher Steele was talking to people in the State Department. It’s called the Steele dossier, it’s really just Clinton opposition research. I think once we get to the bottom of this, what we’re going to find is that Steele had a very small role in actually crafting this,” he said.

Nunes was referring to a Senior State Department official, Kathleen Kavalec, who warned the FBI before the FISA warrant application about Steele and his apparent political motivations.

He added, “These really were the perverted fantasies of Glenn Simpson working with the Clinton campaign to say ‘what can we draw up here that we can spread out lies to the American people that we can feed into the FBI and low and behold, let’s get an investigation going on the Trump campaign.’ That’s really what happened here.” (Video Below)

(Related: DiGenova On Durham’s Appointment: ‘Some Of These Guys Are Gonna Go To Prison’)