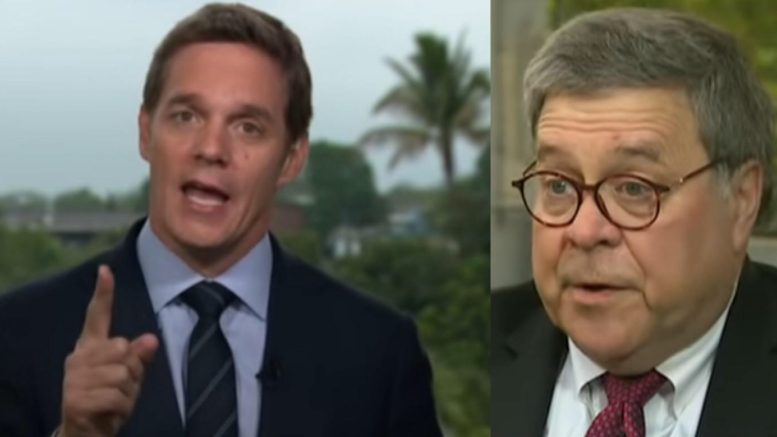 In an exclusive interview that will air Friday morning on Fox News’ “America’s News Room” at 9 a.m. ET, anchor Bill Hemmer sat down for a one-on-one with Attorney General William Barr.

This comes as Barr appointed John Durham, the U.S. attorney in Connecticut, to help investigate the origins of the Russia investigation to determine if the FBI’s “spying” on the Trump campaign in 2016 was adequately predicated.

Bill Hemmer explained that Attorney General William Barr is in El Salvador where his trip is focused on immigration, MS-13, and criminal gangs.

Hemmer said that he and Barr sat down for 20 minutes during their interview at a prison, 30 miles west of the capital city of San Salvidor. “It is hot, it is steamy down here this time of year, and I do believe the overall impression [Barr] was trying to relay to us is that when he took the job a few months ago, he asked a lot of questions and kept asking questions, and did not get answers that essentially added up,” he said.

Barr expressed during his interview with Hemmer, “I’ve been trying to get answers to questions and I found that a lot of the answers have been inadequate. And, I’ve also found that some of the explanations I’ve gotten, ‘don’t hang together’.”

The Attorney General continued, “So, in a sense, I have more questions today than when I first started.” (Continued Below)

Hemmer asked William Barr the burning question next: “Some of what things ‘don’t hang together?'”

Barr responded, “Some of the explanations of what occurred….”

Hemmer immediately asked, “Why does that matter?” (Continued Below)

Then, Barr laid it down: “Because I think people have to find out what the government was doing during that period. If we’re worried about foreign influence, for the very same reason, we should be worried about whether government officials abused their power and put their thumb on the scale.”

Hemmer explained to Martha MacCallum that the phrase “don’t hang together” is the most crucial moment during his interview that he wanted to press upon to the viewers.

“He’s used it several times in this trip already. So, what does that mean?” He added, “Between election day of November 2016 and the inauguration, what decisions were made in the Obama administration and the intel community, that perhaps may have justified the actions they took. And the one example he would say is the Trump Tower meeting on Jan. 6. He clearly has a lot of questions about that.”

Hemmer listed off other topics that will be aired on Friday morning along with the subject of James Comey. (Video Below)