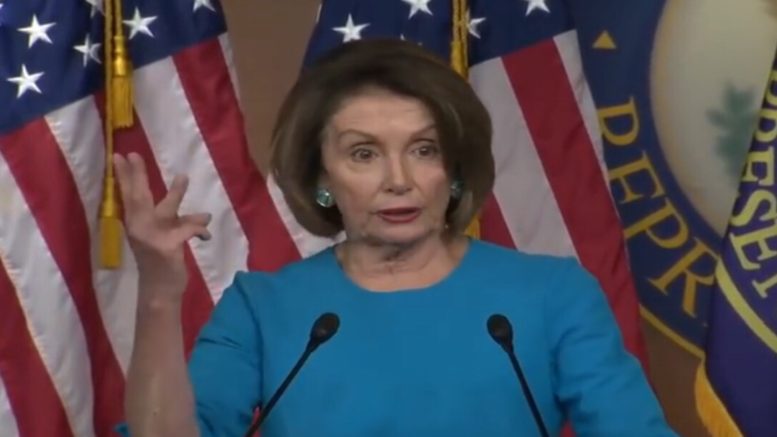 House Speaker Nancy Pelosi (D-CA) held a press conference on Thursday where she said that “nothing is off the table” in pushing the White House to comply with subpoenas in their search digging for information. She also taunted the notion of fining administration officials and impeachment.

This comes after the White House rejected Rep. Jerry Nadler’s (D-NY) request for more documentation. Pat Cipollone, the White House Counsel dismissed Nadler’s request in a letter Wednesday, arguing that it is illegitimate.

Speaker Pelosi, during her press conference on Thursday, said that fining administration officials would be a “path”, which is known as inherent contempt of Congress.

Answering a question from the press, she said if the administration fails to comply, it’s one of the possibilities. “I’m not saying we’re going down that path, but I’m just saying it is not to be excluded. Nothing is off the table.”

She went on to say that with the use of an inherent contempt, “You send a subpoena, [and if] they don’t honor it, then you hold them in contempt. If they do not comply, then you can fine them, and then, you can hold them accountable for the money that you fine them,” the House Speaker said.

Pelosi also said that one of the constitutional purposes of congressional investigations is impeachment.

“Whether it’s using impeachment among other purposes for investigations or whether it’s using fines as an incentive for people earlier on to supply the information, it’s a possibility,” she added. (Video Below)

(Related: Chris Wallace Reacts After Pelosi Accuses AG Barr Of Lying To Congress: ‘What Are You Gonna Do About It?’)