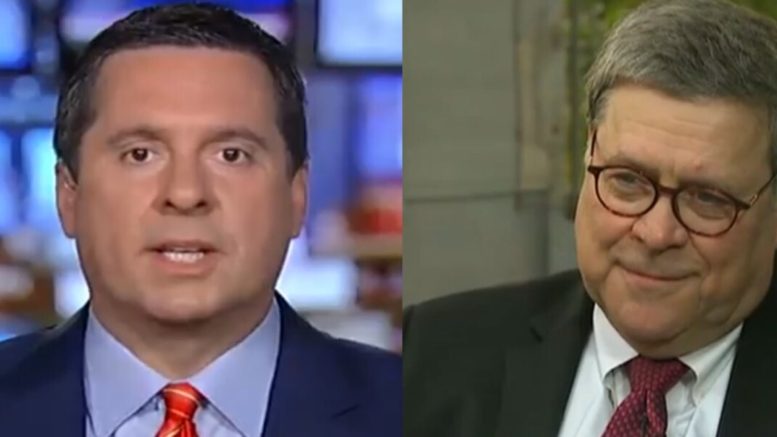 Nunes didn’t hold back and went further than Barr to answer when special counsel Robert Mueller knew that there was “no collusion” between the Trump campaign and Russia.

In an interview that aired Friday on Fox News, the Attorney General said he couldn’t name a date when Mueller didn’t know when there was no collusion but added that “I’ve been trying to get answers to questions and I found that a lot of the answers have been inadequate. And, I’ve also found that some of the explanations I’ve gotten, ‘don’t hang together’.”

The Attorney General continued, “So, in a sense, I have more questions today than when I first started.”

Nunes responded saying that it’s similar to the House Republican investigation. “As we continue to pull more pieces of the onion, more and more things started to fall out that we had to follow up on. Even today, we continue to be in need of more answers.”

He clarified pointing to new emails that have surfaced about Christopher Steele, which has been sitting at the FBI, DOJ, and State Department, that were withheld from Congress. (Continued Below)

“I think what you’re seeing is a real Attorney General, a professional, and someone who’s not going to take this poisonous garbage that the Democrats and the Clinton campaign started and irresponsible people in Congress, and the media continued to put out there and poison people!” Nunes declared. [Emphasized]

The Attorney General didn’t shy away from the “spy” term during his interview and Nunes expressed, “It’s ridiculous! Every American out there knows what spying is. This all about narrative building by the left to cover up what they did and you have accomplices in the media. This is foolishness.”

He went to say, “Everyone in the media should be laughing at the politicians” adding that “It’s a joke!” (Continued Below)

Barr during his interview made clear that the investigation was handled at very senior levels. “The thing that’s interesting about this, is that it was handled at a very senior level of these departments. It wasn’t handled in the ordinary way that investigations or counterintelligence activities are conducted. It was sort of an ad-hoc small group, and most of these people are no longer with the FBI or the CIA or the other agencies involved,” Barr said.

Barr was asked during his interview when did he know there was no collusion. Nunes fired off: “Bob Mueller knew the day that he walked in the door there was no evidence of the Trump campaign colluding with Russians!” [Emphasized]

Sandra Smith challenged Nunes on that point, noting that Barr has not publicly said when the collusion question was solved by Mueller.

“I’m able to answer that because we looked at all the work. We looked at all the intelligence. We’ve known for… our report came out a year ago. There’s zero evidence of the Trump campaign colluding with Russians, period,” Nunes countered. (Video Below)

The Attorney General also said during his interview that explanations he’s received “don’t hang together”.

When asked why that matters, Barr said, “Because I think people have to find out what the government was doing during that period. If we’re worried about foreign influence, for the very same reason, we should be worried about whether government officials abused their power and put their thumb on the scale.”