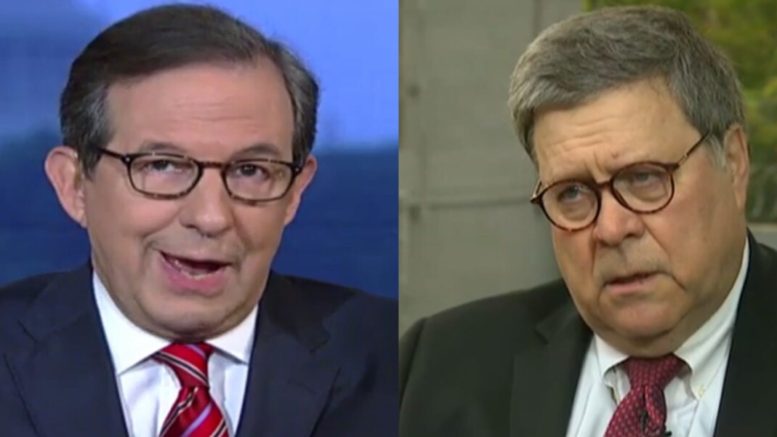 On Friday, “Fox News Sunday” anchor Chris Wallace weighed in on the interview that was aired between Bill Hemmer and Attorney General William Barr.

Wallace claimed that Barr “clearly is protecting this president and advocating his point of view.”

During a segment on “America’s Newsroom,” Chris Wallace suggested, “What really comes across to me most of all is that for two years, Donald Trump sat there and said I don’t have an attorney general, I don’t have somebody out there looking for and protecting my interests. He clearly has that now with Bill Barr.”

(Related: Barr Hits Back At Dems As He Discloses More Details In His Search For Answers: ‘They May Be Concerned About Outcome Of A Review’)

“Not saying that Barr isn’t right in everything he says, but he clearly is protecting this president and advocating his point of view on a lot of these issues,” Wallace claimed.

He added, “And I suspect that President Trump, who probably has watched some of this interview himself, is saying finally, ‘No Jeff Sessions, Bill Barr instead.'” (Continued Below)

During the sit-down with Fox News anchor Bill Hemmer – Barr’s first TV interview since becoming attorney general – Barr said the country must know “exactly what happened” with counterintelligence activities conducted during the 2016 election — and that he is determined to get to the bottom of the case, reported Fox News.

Wallace also suggested that Barr was not forthcoming about Mueller’s letter that was leaked to the press the night before Barr testified before the Senate Judiciary committee.

The Attorney General has made good on his promise and appointed U.S. Attorney John Durham to investigate the origins of the Russia investigation to determine if the FBI’s “spying” on the Trump campaign in 2016 was adequately predicated. (Continued Below)

“I am reviewing the conduct of the investigation and trying to get my arms around all the aspects of the counterintelligence investigation that was conducted during the summer of 2016,” Barr said.

(Related: Juan Williams Gets Schooled After Calling Barr’s Investigation ‘Silliness’: It’s Not If There Was Corruption & An Abuse Of Power’)