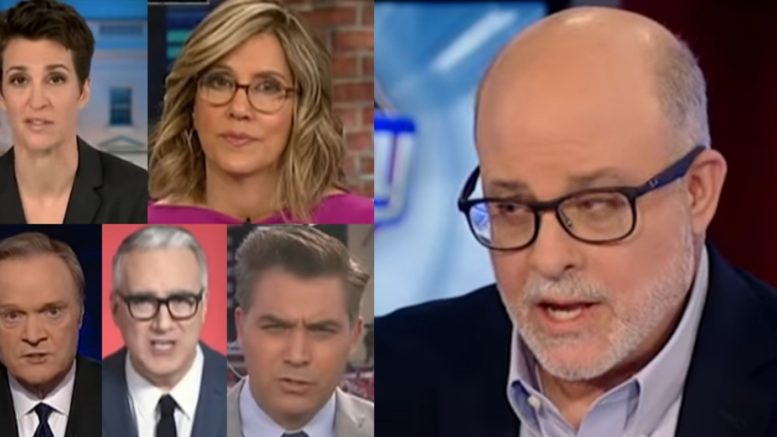 On Friday, Mark Levin sat down with Sean Hannity and discussed the media’s handling of the Russia probe, while it was going on and the aftermath.

Hannity began by playing clips showing how in sync the media was throughout the Russia probe as they delivered wrong facts to the public. And he showed how the same type of strategy is currently going on as they claim America is facing a “constitutional crisis”, now that Attorney General William Barr was held in contempt.

Hannity then turned it over to Levin who explained that what we’re seeing with over 90% of the media can be considered as “group think,” a “pack mentality” and “ideology going in one direction.” He declared, “You can’t find a dime’s worth of difference between the media and the Democrat party in this country. Look at the guests they bring in.”

Levin cited a study done by Harvard that focused on the first 100 days while Trump was in office. He said, “You know what they found? 90% of the coverage was negative by CNN and MSNBC, over 80% New York Times, Washington Post. Nobody was below the 70% range, which was FOX.”

He went on to say that it’s “hard to find a distinction” between news and opinion on other networks as well as the front pages of The Washington Times and The New York Times.

Being the constitutional scholar that he is, Levin used the latest claim of a “constitutional crisis” to show just how much the media and Democrat Party are on the same wavelength.  He insinuated the people that the media cite in articles or bring on their shows are “illegitimate” when it comes to the constitution. Video Below

After Hannity mentioned that “99.9%” of people in the media got the Russian collusion story wrong, Levin proclaimed, “They didn’t get it wrong. This is what they wanted to do.”

“They don’t care about right and wrong. They’re driven by ideology,” Levin continued and added that they reported the way they did on purpose to “take the President out.”