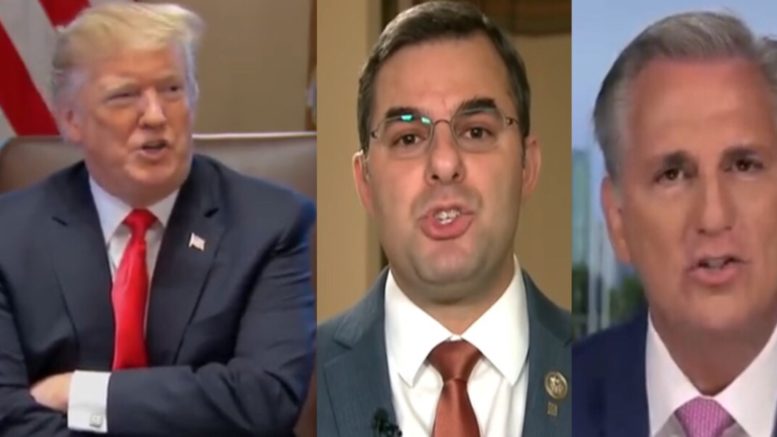 Republican House Minority Leader, Kevin McCarthy, joined host Maria Bartiromo on Fox News’ “Sunday Morning Futures” where he weighed in on RINO Justin Amash (R-MI), after his recent remarks he made about President Trump on Twitter.

In a series of tweets on Saturday, Amash became the first Republican to stab Trump in the back by announcing that he’s in favor of impeaching the President.

“Contrary to Barr’s portrayal, Mueller’s report reveals that President Trump engaged in specific actions and a pattern of behavior that meet the threshold for impeachment,” Amash wrote in one of a series of tweets. “Attorney General Barr has deliberately misrepresented Mueller’s report,” he added.

Trump wrote on Twitter Sunday morning, “Never a fan of @justinamash, a total lightweight who opposes me and some of our great Republican ideas and policies just for the sake of getting his name out there through controversy.”

The President added, “If he actually read the biased Mueller Report, “composed” by 18 Angry Dems who hated Trump he would see that it was nevertheless strong on NO COLLUSION and, ultimately, NO OBSTRUCTION… Anyway, how do you Obstruct when there is no crime and, in fact, the crimes were committed by the other side? Justin is a loser who sadly plays right into our opponents hands!” (Continued Below)

Kevin McCarthy also hit back at the fake Republican and said, “Those who know Justin Amash, this is exactly what he wants. He wants to have attention.”

McCarthy went on to say, “You’ve got to understand Justin Amash. He’s been in Congress quite some time and I think he’s only ever asked one question in all the committees he’s ever been in. He votes more with Nancy Pelosi than he ever votes with me. It’s a question whether he’s even in our Republican conference as a whole. What he wants is attention in this process.”

He added that Amash is not a criminal attorney, nor has he met Robert Mueller or Attorney General Barr. “He wants a Sunday show to put his name forward with a question,” McCarthy suggested. (Continued Below)

The House Minority Leader also noted that Amash is the one Republican who always votes against what Republicans put forward.

“When you watch on the floor, you could have a Bill with 400 votes all supporting it…. there’s always one opposed, and that will be Justin Amash,” McCarthy pointed out.

….he would see that it was nevertheless strong on NO COLLUSION and, ultimately, NO OBSTRUCTION…Anyway, how do you Obstruct when there is no crime and, in fact, the crimes were committed by the other side? Justin is a loser who sadly plays right into our opponents hands!

I offer these conclusions only after having read Mueller’s redacted report carefully and completely, having read or watched pertinent statements and testimony, and having discussed this matter with my staff, who thoroughly reviewed materials and provided me with further analysis.