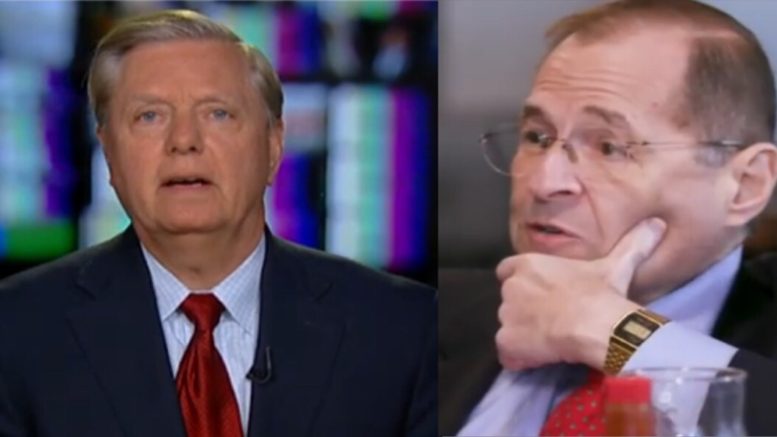 President Trump has directed former White House Counsel Don McGahn to skip a House Judiciary Committee hearing scheduled for Tuesday, citing a Justice Department opinion that he cannot be compelled to testify about his official duties — and, through his legal team, McGahn confirmed Monday evening that he won’t appear, reported Fox News.

House Judiciary Committee Chairman, Jerry Nadler (D-NY), responded, “We are having the hearing tomorrow and we’re expecting Mr. McGahn to show pursuant to the subpoena.”

In a letter to Nadler, McGahn attorney William Burck said his client won’t show up. Burck said current White House Counsel Pat Cipollone had communicated that Trump had instructed McGahn not to testify and that Assistant Attorney General for the Office of Legal Counsel Steven Engel had said McGahn was immune from testifying.

Burck said in his letter, “Mr. McGahn understands from your prior correspondence that the Committee would vote to hold him in contempt should he not appear tomorrow and the House of Representatives may follow suit. While we disagree with the Committee’s position and hope it will instead seek an accommodation with the White House, Mr. McGahn also must honor his ethical and legal obligations as a former senior lawyer and senior advisor to the President. In short, it is our view that the Committee’s dispute is not with Mr. McGahn but with the White House.”

Burck added: “Mr. McGahn remains obligated to maintain the status quo and respect the President’s instruction. In the event an accommodation is agreed between the Committee and the White House, Mr. McGahn will, of course, comply with that accommodation.”

White House Press Secretary Sarah Huckabee Sanders blasted Democrats in a statement Monday for their ongoing pursuit of all things Trump, suggesting they want a “wasteful and unnecessary do-over” after the release of the Mueller report. (Continued Below)

“The House Judiciary Committee has issued a subpoena to try and force Mr. McGahn to testify again. The Department of Justice has provided a legal opinion stating that, based on long-standing, bipartisan, and Constitutional precedent, the former Counsel to the President cannot be forced to give such testimony, and Mr. McGahn has been directed to act accordingly,” the Press Secretary said. “This action has been taken in order to ensure that future Presidents can effectively execute the responsibilities of the Office of the Presidency.”

The DOJ memo said McGahn, like other senior advisers to a president, has “immunity” from being compelled to testify about his official duties.

“This immunity applies to the former White House Counsel. Accordingly, Mr. McGahn is not legally required to appear and testify about matters related to his official duties as Counsel to the President,” the memo said. (Continued Below)

Senator Lindsey Graham (R-SC), also weighed in during an interview on Fox News with host Martha MacCallum on Monday and leveled Jerry Nadler.

“I think anything going on in the House is political circus as policial revenge,” Graham expressed.

He explained, “Mueller was the one that I trusted to be fair. Don McGahn testified to Mueller for about 30 hours. They gave Mueller 1.4 million documents. What Nadler is doing is a political effort and if I were the White House, I would not empower his efforts to try to take the President down.”

Graham continued, “Mueller’s decision matters to me, I could care less what Nadler thinks. Mueller was the final word on all things Trump. (Video Below)

Sen. Lindsey Graham’s response about Dan McGahn starts at 3:25 into the video: