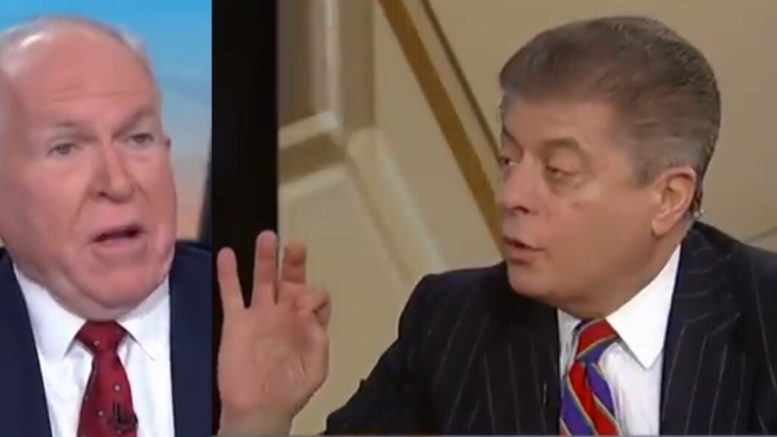 According to Judge Andrew Napolitano, an email sent by former FBI Director James Comey to his staff opens a new window, and it could reveal some very bad news for former CIA Director John Brennan.

He added, “So there is information that exists in December of 2016 and I hope anyone who has access to it, Senator Burr, Devin [Nunes], whoever is open minded, go look at that and I think it will help you understand whether or not that dossier, that unverified hearsay, was used for five times or just four times by the United States government. It’s pretty bad if it was used four times. It’s really bad if it was used five times!”

However, a dispute is now erupting over which government official pushed the unverified dossier into “Russia meddling” at a time when the Justice Department is investigating how government agencies handled the dossier that Christopher Steele wrote and the Clinton campaign and DNC funded.

Last week, Swamp Drain reported that Brennan put the blame on James Comey and they are now pointing the finger at each other in the wake of the Steele dossier. (Continued Below)

Brennan has been running around for the last two year accusing President Trump of treason, but if the email is accurate, it would show that it was Brennan who said use the dossier in the intel assessment that Russia meddled in the U.S. election and has nothing to do with Trump.

“I haven’t seen the e-mail obviously, but if the e-mail is correct, it directly contradicts what Brennan said under oath, which is another thing for the folks in Connecticut to examine, whether or not the former director of the CIA perjured himself, in order to make himself look good,” Judge Napolitano explained.

He also pointed out that it’s dependent upon how aggressive U.S. Attorney John Durham wants to get. (Continued Below)

Last Tuesday, Trey Gowdy spoke with Martha MacCallum and said that he’s seen the document adding that, “Brennan and Comey right now, the only thing they seem to share is a hatred for Donald Trump. It’s gonna be interesting if they begin to turn on one another.” He also suggested, “Comey has a better argument than Brennan, based on what I’ve seen.”

(Related: Gowdy Drops A Dossier MOAB Exposing A Fifth Possible Way It Was Used To Spy: ‘Brennan, Clapper, Comey Know If It Was Used’)