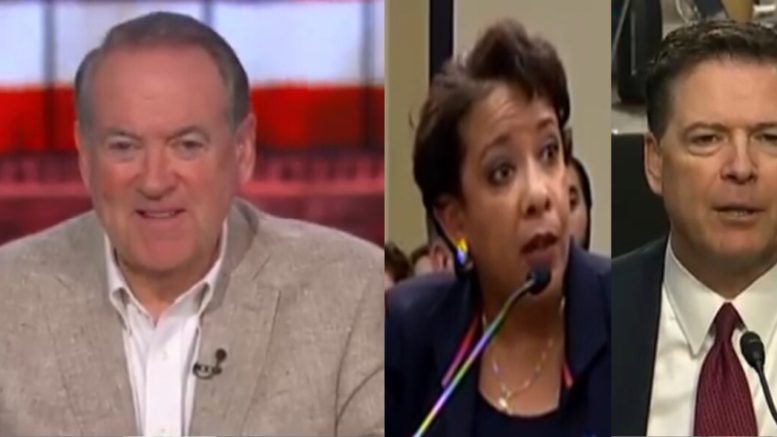 This comes after Rep. Doug Collins (R-GA), released the transcripts from several private testimonies, including that of former Attorney General Loretta Lynch.

Rep. Collins released the transcripts of eight closed-door testimonies on Monday from his committee’s investigations into the FBI and Obama’s DOJ. Based on the newly released documents, Loretta Lynch threw James Comey right under the bus.

In the summer of 2017, Comey said during his public hearing before the House Intelligence Committee, “The Attorney General had directed me not to call it an investigation, but instead, to call it a matter, which confused me and concerned me.”

Lynch, however, claimed that did not happen and said she was quite surprised that Comey characterized it in that way.

Mike Huckabee weighed in and said, “She basically called him a liar and that’s something that he’s been called a lot over the past few months by people who have looked at what he said and how it contradicts other things that he’s said.” (Continued Below)

Huckabee went on to say, “I think what we are seeing is that this whole issue has now moved from a political theater to a legal theater, and that means the rules are changed.”

“When it was all about the political rhetoric, people could say whatever they want. James Comey could speak. Politically he could go on talk shows, he could go out and promote his book, he could present himself as some big deal who knew a lot and was a little more sanctimonious than pretty much anyone else in the country,” he continued.

The former Governor added, “Now, things have changed. William Barr is going to be looking at this, not over the politics, but whether or not people broke the law– whether or not they stepped over their lines and did something that was not just unethical, but was illegal, something that could cost them really their freedom.” (Video Below)

As the tide is changing, Huckabee concluded, “I think it’s going to be interesting as these folks are turning on each other out of a matter of self-preservation.”

(Related: Mike Huckabee Gets The Last Laugh After Comey’s Town Hall: ‘Rumors Are That Trump Will Rename Gitmo Comey Island’)