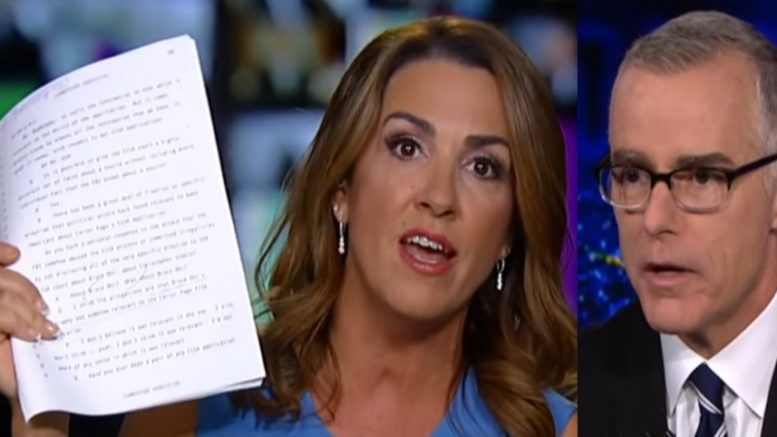 On Monday, Sean Hannity kicked off his program by discussing the release of transcripts from several private testimonies, including that of former Attorney General Loretta Lynch.

Hannity claimed Lynch’s transcript suggests that either she or former FBI Director James Comey lied to Congress, which is a serious offense. But the bigger story lies within text messages that are expected to be released from Comey’s former right hand man, Andrew McCabe.

Investigative Journalist Sara Carter joined Hannity to discuss the “treasure trove” that she and others are betting will be found within McCabe’s text messages and emails.

Carter mentioned how Former FBI Supervisory Special Agent Jeffrey Danik joined forces with Judicial Watch in a nearly two -year fight with the DOJ to obtain such documents on McCabe. Judicial Watch filed a motion in court against the DOJ last week, and they are expecting to get McCabe’s texts and emails handed over soon.

She said, “Apparently, it is a treasure trove. It’s, not only, going to answer questions regarding his wife and those issues, but apparently there’s a lot more information contained in these text messages and emails the FBI does not want released.”

Carter then went on to briefly discuss the transcripts Rep. Collins released on Monday, and what she found most compelling, so far, after scouring through them. Video Below

She said one of the most “interesting” parts of the transcripts came from the testimony of FBI national security lawyer, Trisha Anderson, who worked closely with James Baker and Lisa Page, and signed off on the initial FISA application.

According to Carter, Trisha Anderson downplayed Bruce Ohr’s role as a “back channel” to keep information from Christopher Steele flowing into the department after he was fired from the FBI.

Carter also pointed out how Anderson refused to answer on multiple occasions if there was enough evidence to go after a FISA with what was presented in the Steele Dossier. Video Below