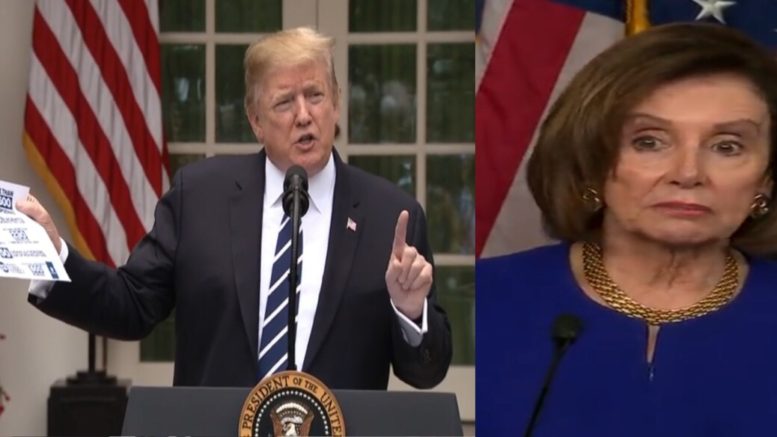 House Speaker Nancy Pelosi (D-CA), is trying to have it both ways and overplaying her hand.

President Trump held a surprise press conference in the Rose Garden Wednesday after he cut short a meeting with Speaker Nancy Pelosi, Senate Minority Leader Chuck Schumer (D-NY), and other Democrats that were expected to be at the White House for a meeting on infrastructure. He promptly demanded the speaker end House investigations involving him before an infrastructure deal could be struck.

The President said he ended the meeting with the Democrats because he was not happy with Pelosi’s claim that he was involved in a “cover-up” related to the Mueller investigation into alleged Russian collusion.

Pelosi, however, clearly agitated and fuming, thought she could get away with her remarks and held a press conference afterward with Schumer, where they tried to spin the narrative on why Trump ended the meeting. (Continued Below)

Schumer claimed during the presser, “What happened in the White House would make your jaw drop.”

President Trump swiftly responded to Pelosi’s prayer remarks on Twitter afterward and said he was thankful. (Video Below)

“Democrat leadership is tearing the United States apart, but I will continue to set records for the American People – and Nancy, thank you so much for your prayers, I know you truly mean it!” President Trump replied.

After Trump pulled out of an infrastructure meeting with Democrats, @SpeakerPelosi says "I pray for the President of the United States." pic.twitter.com/RH6SRZlbsi

….But they really want a do-over! You can’t investigate and legislate simultaneously – it just doesn’t work that way. You can’t go down two tracks at the same time. Let Chuck, Nancy, Jerry, Adam and all of the rest finish playing their games….

….Democrat leadership is tearing the United States apart, but I will continue to set records for the American People – and Nancy, thank you so much for your prayers, I know you truly mean it!