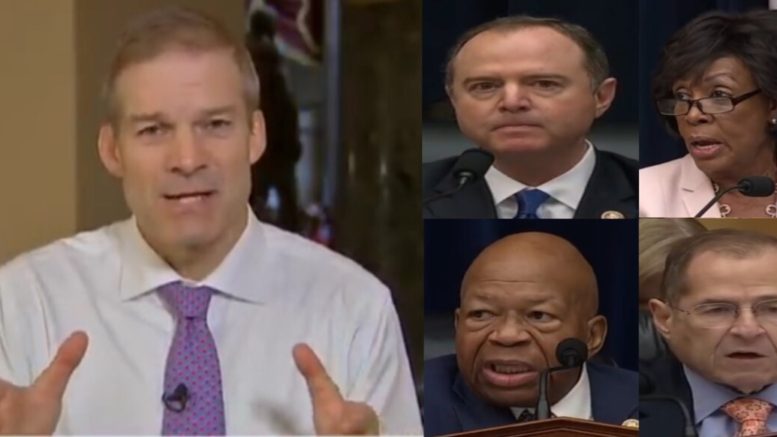 This comes after Democrats continue their charades investigating “all things Trump” and even pursuing multiple investigations seeking a “re-do” of Mueller’s probe, despite the Special Counsel’s bottom line conclusions of “no collusion” and “no obstruction.”

Jordan believes that his Democratic colleagues have already started “impeachment proceedings”, but said that they “won’t formally declare it.”

He noted there are “secret” Memorandums of Understanding between the various Democratic Chairman, and said that they are coordinating their attacks at the President– as each member is assigned to do a “certain thing”– like a contractor.

“I don’t think the Democrats can help themselves,” Jordan suggested. “Remember, after all on the very first day of Congress they introduced articles of impeachment. I think they’ve been determined to get here, and I think they’ve already started. They just haven’t formally stated that’s what they’re up to.”

The Ohio Congressman clarified, “You’ve got the Ways and Means Chairman saying ‘I need a private citizens tax returns. I’m demanding I see the President’s tax returns.’ You’ve got the Oversight Committee Chairman saying ‘I want 8 years of the President’s business records’. You got Maxine Waters on the Financial Services saying ‘I want 10 years of [Trump’s] banking records’– before he was even a candidate.” (Continued Below)

“This is the Democrats,” Jordan added. “So much focus on taking down the President, not any type of focus on doing what’s best for the country. I think this is where they are going to go, so I don’t know what we can do to satisfy that. They are bound and determined to do things we’ve never seen before.”

(Related: Trump & Meadows Sound Off After Nadler Issues More Subpoenas: ‘What On Earth Was The Point Of A Taxpayer Funded Special Counsel?’)

On Tuesday, Jordan took to Twitter and wrote, “The American people don’t want impeachment. There’s no basis for it! But the Democrats are so angry that our President is succeeding and so desperate to please their base that they’ll do it anyway.” (Video Below)

The American people don't want impeachment. There's no basis for it!

But the Democrats are so angry that our President is succeeding and so desperate to please their base that they'll do it anyway.