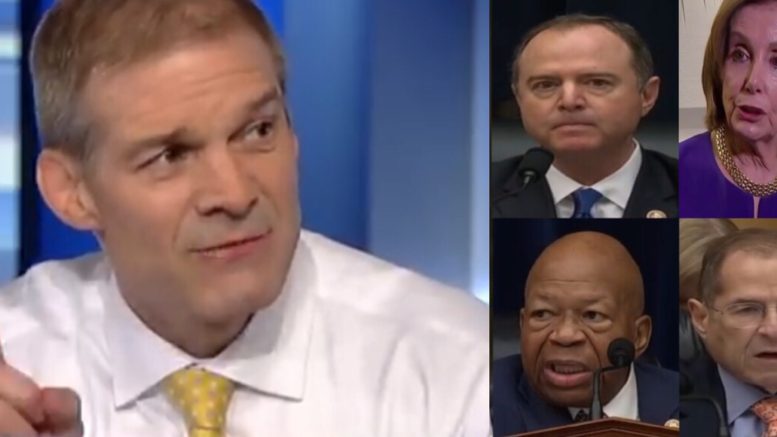 House Oversight Committee ranking member, Congressman Jim Jordan (R-OH), joined host Laura Ingraham on Fox News’ “The Ingraham Angle” Wednesday where he weighed in on the Democrats relentless attacks toward the President, but explained that their coordinated effort is a ploy to hide Attorney General William Barr’s investigation into the origins of the Russia probe.

This comes after a day of political drama on Capitol Hill where House Speaker Nancy Pelosi (D-CA), held a “secret meeting” with Democrats, then accused President Trump of a “coverup”.

Rep. Jim Jordan believes that the Democrats’ obsession with taking down President Trump ahead of the 2020 election is not in the country’s best interest and ultimately overlooks his many successful accomplishments.

“When your entire focus is on attacking and stopping the President, you can’t do what’s best for the country,” he said.

Jordan bragged about President Trump’s list of accomplishments despite the Democrats’ relentless attacks and effort to destroy the President. Jordan said Trump has had an “unbelievable” record of achievement during his two-and-a-half years in office, including reducing regulations, cutting taxes, appointing conservative judges Neil Gorsuch and Brett Kavanaugh to the U.S. Supreme Court, and getting the U.S. out of the Iran deal, among other achievements. (Continued Below)

“I think it’s a pretty good record to run on. The only thing the Democrats are going to have to run on is attacking the President, who’s responsible for all those good things,” Jordan said.

Jordan thinks that the Democrats’ “coordinated effort” at Trump is a ploy to cover up the fact that  Barr’s investigation will reveal that spying took place during Trump’s 2016 presidential campaign.

“All the evidence is seeming to point to, the FBI was out to get the President, and [Barr] is going to get to the bottom of it. That’s the investigation that counts, and that’s the one that scares all these people, and that’s why they’re scrambling,” he explained. (Video Below)

(Related: Trump & Meadows Sound Off After Nadler Issues More Subpoenas: ‘What On Earth Was The Point Of A Taxpayer Funded Special Counsel?’)