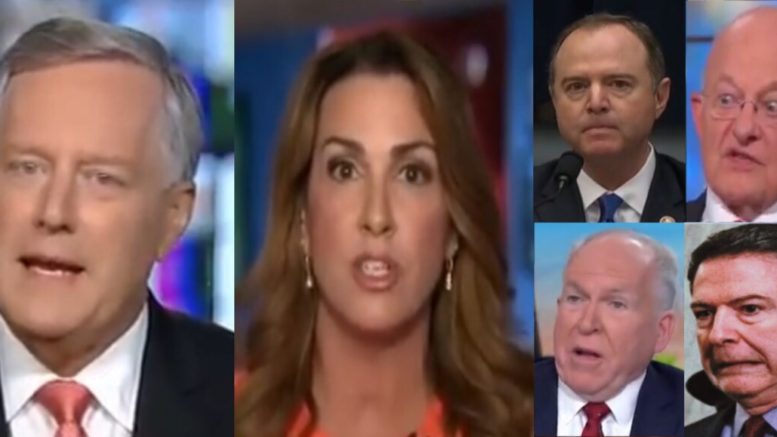 Congressman Mark Meadows (R-NC), and investigative journalist Sara A. Carter joined host Sean Hannity on Fox News Wednesday where they weighed in on Democrats “coordinated attacks” toward the President after they didn’t get the results they wanted from the Mueller report.

This comes as Democrats are seemingly trying to “cover” and “switch the narrative” in a synchronized effort to distract from Attorney General William Barr’s investigation into the origins of the Russia probe.

The plug has been pulled from deep within the swamp as more closed-door transcripts are being released from high ranking government officials, who tried to take out the President, and now are scurrying and turning on each other.

Rep. Meadows explained that there’s a right time to release all of the evidence. “For us, it’s a search for the truth. And I can tell you, there’s information coming that will curl your hair!” He declared. [Emphasized]

“The reason why it’s so visceral, the response from the Democrats is so visceral right now, is because they know.” Meadows explained. “They’ve seen documents– Adam Schiff has seen documents that he knows will actually put the finger pointing back at him and his Democrat colleagues, not the President of the United States. So, that’s why you’re seeing it.”

Sara A. Carter weighed in on what’s to come when more damning information is unleashed and she said, “Once they release that information, which is so vitally important, the American people will understand what’s going on here.

Carter noted some of the information that will be released, will explain how George Papadopalous and Carter Page were set up and spied on. “Once that information comes out, once we get the Gang of Eight binder, once the full FISA disclosures are out there, it will start putting the pieces together for the American people,” she explained.

She also brought up Devin Nunes, who sent a letter on Wednesday to President Trump, to ask British Prime Minister Theresa May about the Steele dossier when he visits the United Kingdom next month. (Continued Below)

“[It’s] going to reveal extraordinary information. I spoke to several sources in the U.S. intelligence community that said there would be no way that British MI5, British MI6, senior executives, directors of those agencies would know about this dossier and then, not share that information with John Brennan. There’s gonna be a lot more information coming out about what did Brennan knows, what did Comey know, what did Clapper know, and how did foreign intelligence play a role in what happened with our U.S. FBI probe into the Trump campaign,” Carter stated.

In his letter to President Trump, Nunes lists a number of recommended questions “about the British government’s knowledge of the Steele dossier and whether the British government took any unilateral actions based on information provided by [Christopher] Steele or at the request of any U.S. departments.”

“Describe any communications or relationship, if any, Joseph Mifsud (potentially also known as Joseph di Gabriele) has had with British intelligence and any information the British government possesses about Mifsud’s connection to any other government or intelligence agency,” Nunes wrote. (Video Below)

Meadows and Carter concluded how soon we can expect to see information released.

“I think within weeks we are gonna get information, and as it comes out, it will be an avalanche of information for the American people. And, I think they will be very disturbed at what they learn,” Carter expressed.

Meadows agreed and responded, “We’re talking about days, not weeks, so very soon.

(Related: Sen. Graham Defiantly Exhibits How Dems Impeach Hysteria Will ‘Blow Up In Their Face’