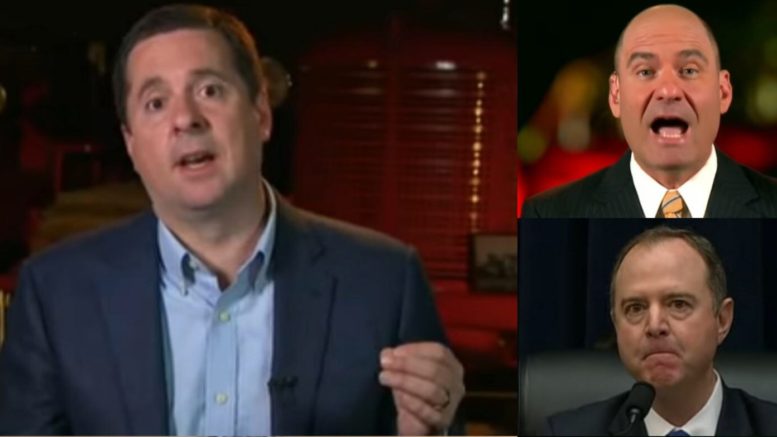 “Today, at the request and recommendation of the Attorney General of the United States, President Donald J. Trump directed the intelligence community to quickly and fully cooperate with the Attorney General’s investigation into surveillance activities during the 2016 Presidential election.”

“The Attorney General has also been delegated full and complete authority to declassify information pertaining to this investigation, in accordance with the long-established standards for handling classified information.

“Today’s action will help ensure that all Americans learn the truth about the events that occurred, and the actions that were taken, during the last Presidential election and will restore confidence in our public institutions.” (Continued Below)

Rep. Nunes reacted to Democrat Congressman, Adam Schiff who is clearly upset after finding out that President Trump gave Attorney General William Barr authority to declassify. Schiff took to Twitter to push his theory and reaction onto the American public.

Schiff said, “While Trump stonewalls the public from learning the truth about his obstruction of justice. Trump and Barr conspire to weaponize law enforcement and classified information against their political enemies,” said Schiff. “The coverup has entered a new and dangerous phase. This is un-American.”

Nunes replied, “The old adage that whatever they accuse you of doing, they’re are doing.” (Continued Below)

Nunes explained, “Let’s go through a couple of quick facts: let’s start with the fact that their party, their candidate, Clinton, paid for dirt that was picked up and used by the FBI. Multiple people put it in the FBI, the State Department, that caused or maybe the FBI wanted to do it, but it caused this phony investigation to begin with.”

He went further and said, “If you go back to when House Republicans on the Intelligence Committee went to court to find out who exactly paid for this, and we had to sue in court to get Fusion GPS’s record, guess who opposed it? The House Democrats led by Nancy Pelosi.”

Nunes also said when he put his memo forward about Carter Page and FISA abuse, House Democrats opposed that too and declared, “So the idea of a cover-up… they’re covering up their own cover-up!” [Emphasized]

Democratic party activist, Chris Hahn, made a statement to Bream earlier in the show where he said that the declassification should go through the Director of National Intelligence (DNI) and claimed, “the way the President is doing this is aligning himself to make a political move.”

Nunes chuckled and responded, “Well, we don’t elect bureaucrats in this country to control who decides when things are classified or not classified. The President of the United States has the ultimate declassification authority. I don’t know what these people are talking about. Whenever they want the bureaucracy to control things, they’re fine with it. Whenever it’s things they don’t want out, then they change their position.” (Video Below)

The California Congressman added that Republicans have been very consistent and that they want everything out. “We’ve been saying that for 2 and half years and they have zero evidence of the Trump campaign colluding with Russians, but at the same time we have found them hanging out with all kinds of Russians, which is why they’re trying to hide from this. They don’t want a real investigation.”