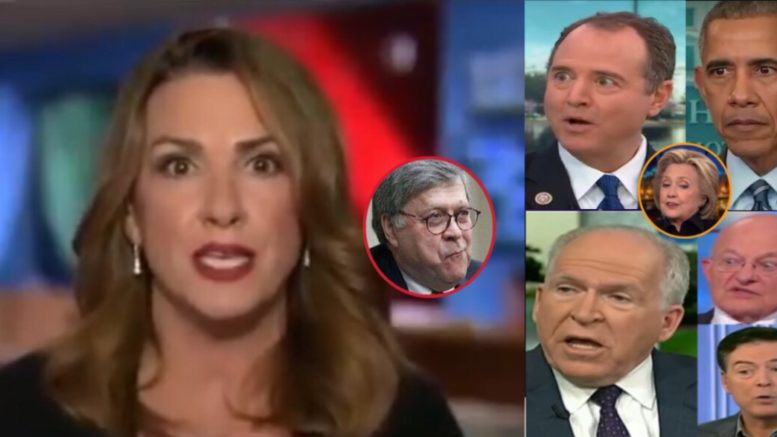 The panel could hardly contain their excitement after it was announced that President Trump gave Attorney General William Barr authority to declassify documents pertaining to spying on President Trump’s 2016 campaign.

Tom Fitton began by explaining that Judicial Watch announced on Tuesday that they filed a Freedom of Information Act (FOIA) lawsuit against the Department of Justice seeking draft copies of FBI charts containing information on potential “statutory violations” committed by Hillary Clinton in the former secretary of State’s use of a non-secure, non-government email server to conduct government business.

Judicial Watch is also suing for draft copies of talking points prepared by the FBI for its officials to use following then-Director James Comey’s July 2016 press conference during which he recommended against prosecuting Clinton for mishandling classified information.

“We’re trying to figure out ‘the wording change'”. [Comey used “matter”, instead of “an investigation”] They had to get around quoting the law and accusing her or talking about her conduct because it would lead obviously presumptively to an argument for a prosecution,” Fitton said.

“And after that, even after they exonerated her or gave her a get of jail free card, practically speaking, because of the sham investigation– they still were writing a chart of all the laws she may have violated with excuses as to why she shouldn’t be prosecuted. And someone asked ‘why are you still working on this? Keep it in your back pocket,'” Fitton added. “We want that information as well.” (Continued Below)

Sara Carter responded to Fitton’s news and said, “We can see the evidence over and over again based on documents that Judicial Watch and Congressional lawmakers have been able to pull forward and now see this, and how important it is that the President issued this memorandum.”

“I want you to think about this: look at who we put in the memorandum. The Department of Energy, the Department of Homeland Security, the Department of Treasure, Secretary of State, the CIA… he is asking all of these agencies. No more slow rolling, no more slow walking this information. Let’s speed up this process, and let’s let the Attorney General then decide what documents should be made public because the American people deserve that,” she said.

Carter added, “And people should take a very, very close look at all of the agencies that he has demanded cooperate with the Attorney General, that says a lot.” (Continued Below)

Asked what she thinks is the most damaging piece of information that will come out of the declassification, Carter replied, “I think there’s going to be two things. The first, I believe, is going to be the exculpatory evidence, that of George Papdopolous and Carter Page. If they were recorded, which we have heard they were by Stephan Halper, who was a spy basically for the FBI. And, that the FBI withheld that information from the foreign intelligence surveillance court. It’s going to be huge!”

Carter continued, “I’m going to tell you something else, something that people aren’t talking about– and that was the unmaskings. I think one of the biggest pieces of information that’s going to come out here too as well as those people that were unmasked. The Americans that were unmasked, their telephone conversations with foreigners.”

On September 20, 2017, Fox News reported that Susan Power unmasked over 260 persons in her last year as U.S. ambassador to the United Nations in an attempt to uncover associates of President Trump. She “was ‘unmasking’ at such a rapid pace in the final months of the Obama administration that she averaged more than one request for every working day in 2016,” even seeking “information in the days leading up to President Trump’s inauguration.”

On October 13, 2017, Power testified behind closed doors about this matter to the House Intelligence Committee. House Oversight and Government Reform Committee Chairman Trey Gowdy, who also sits on the Intelligence Committee, stated that “Her testimony is they [the unmasking requests] may be under my name, but I did not make those requests.”

“That’s unheard of! Put it this way: When John Bolton was at the U.N. he unmasked 3 people. She unmasked close to 300, and I’m going to tell you some of those names are going to be very important when they come out,” Carter said. (Continued Below)

Bongino asked if it’s damaging that the U.S. government legal team processed Papadopolous. Sidney Powell confirmed that it is and referred to it as a Brady violation.

The Brady Rule, named after Brady v. Maryland, 373 U.S. 83 (1963), requires prosecutors to disclose materially exculpatory evidence in the government’s possession to the defense. A “Brady material” or evidence the prosecutor is required to disclose under this rule includes any evidence favorable to the accused–evidence that goes towards negating a defendant’s guilt, that would reduce a defendant’s potential sentence, or evidence going to the credibility of a witness, according to LII.

Powell said Andrew Weissmann, Mueller’s pit bull, loved to hide exculpatory evidence and send innocent people to prison. “I think we’re going to find a lot of violations of the Brady Rule in the Special Counsel’s conduct, “she suggested.

Fitton concluded that John Brennan will be in a lot of trouble because he was pushing the dossier and leaked it to Congress. (Video  Below)

(Related: Schiff Reacts As AG Barr Is Given Authority To Declassify Surveillance Docs: ‘This Is Un-American’)