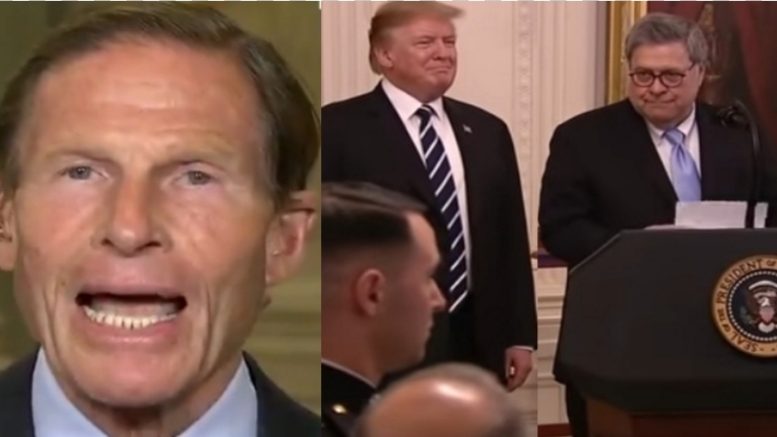 Democrat Senator Richard Blumenthal was “baffled” upon finding out that President Trump gave authority to Attorney General Barr to publicly declassify documents related to the surveillance of Trump’s 2016 campaign.

Blumenthal began by citing the memorandum sent out by Trump that discussed the Barr’s authority to declassify whatever he feels necessary as part of his review of past intelligence activities. And he asked that all agencies promptly comply with Attorney General Barr during the review.

Blumenthal said, “I am baffled by this memorandum. There seems absolutely no reason for it. Agencies have a legal obligation to cooperate with the Attorney General of the United States.”

He then suggested that whatever the President is doing is more of a “distraction” with a “dull, rusty object instead of a bright, shiny one.” Video Below

Blumenthal said there are already two investigations going on, and that he believes the Mueller report contains ample enough evidence that shows the origin of the Russia probe began with “credible information.”

Related Article: Schiff Reacts As AG Barr Is Given Authority To Declassify Surveillance Docs: ‘This Is Un-American’

"It seems much more like an effort to distract with frankly a dull, rusty object, not a bright, shiny one," says Democratic Sen. Richard Blumenthal, reacting to news Pres. Trump has allowed AG Barr to declassify info regarding surveillance activities of his 2016 campaign. pic.twitter.com/a17xBdLnWK

In ending, here is Bill Mitchell’s response to Blumenthal.

As Congress subpoenas Trump's entire life without even the accusation of a crime, Denang Dick Blumenthal complains that he sees "no reason" for the Barr Investigation.

This guy is SUCH a hack.