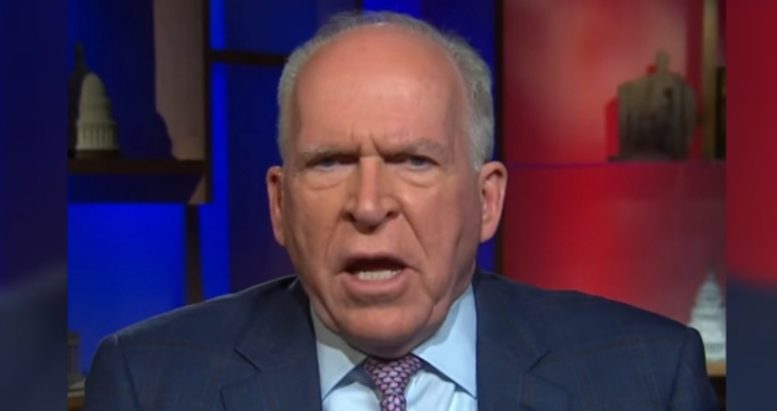 It’s been highly speculated that former CIA Director John Brennan could be a central figure being targeted in Attorney General William Barr’s investigation into the origins of the Russia probe. And now, Brennan is showing signs that he may be feeling the walls closing in.

In a recent interview, Brennan demanded members of Trump’s Cabinet to defy the authority given to Attorney General William Barr to declassify documents associated with surveillance of President Trump’s 2016 campaign.

The long-shot request to some of President Trump’s most trusted associates came while Brennan appeared on MSNBC.

He accused Trump of “trampling” on the authorities of the Director of National Intelligence and the heads of independent Intel agencies.

Brennan said, “I know that my former colleagues in the intelligence agencies are looking upon this with great concern and worry.” Video Below

He went on to say, “I explore Dan Coats, Gina Haspel and others to stand up to this, I think, unprecedented act on the part of Mr. Trump.”

Related Article: Gorka Unleashes An Intense Response To Barr Getting Power To Declassify: ‘The Fun & Games Have Begun’

Brennan then reiterated that he is “deeply, deeply concerned about what is going on now”. Video Below

In ending, we leave you with a cartoon featuring Brennan that President Trump tweeted.

You can see how Brennan reacted to the cartoon by clicking HERE.