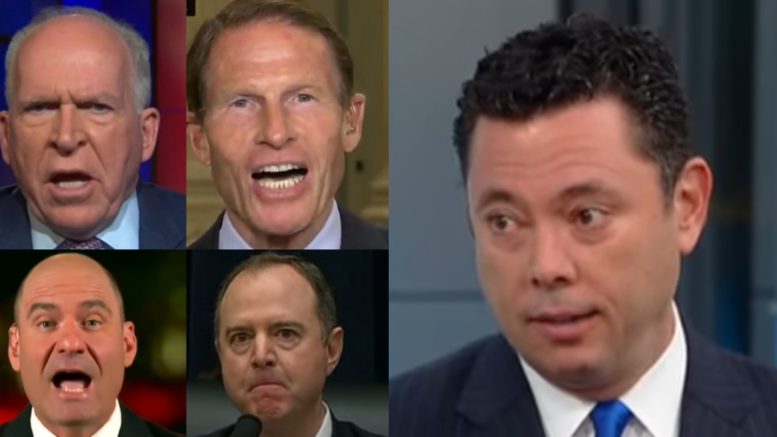 Chaffetz began by theorizing that Trump likely made the move at the request of Attorney General Barr because the IG report is already in. And he thinks that the appointment of John Durham to look into the Russia probe origins suggests that Barr has already seen a “preview” of what is in the IG report.

Trump taking the action he did, according to Chaffetz, will allow Barr to effectively communicate with other intel agencies and see information he wouldn’t normally be able see.

Chaffetz then gave his take on why Democrats have been voicing strong opposition to Barr getting authority to declassify documents related to Trump campaign spying.

Related Article: Brennan Urges Members Of Trump’s Cabinet To ‘Stand Up’ To The Declassification Order

He said it is complete “hog wash” to suggest that Barr is overstepping his boundries, as Democrats claim, and he cited the fact that Barr has every security clearance possible. Video Below

Chaffetz said, “I think it’s projection by the Democrats that they are scared to death that the highest echelons within some of these agencies, specifically Brennan and Clapper and, perhaps Rice and some of these other people on the way, were doing some things that they shouldn’t have been doing.”

“And that exposure scares them to death,” Chaffetz continued, “and they’re projecting out by saying ‘Hey, we shouldn’t release this information.'”

Chaffetz declared that Trump should actually be “winning awards” because of his transparency, unlike Adam Schiff’s “schizophrenic approach.” Video Below