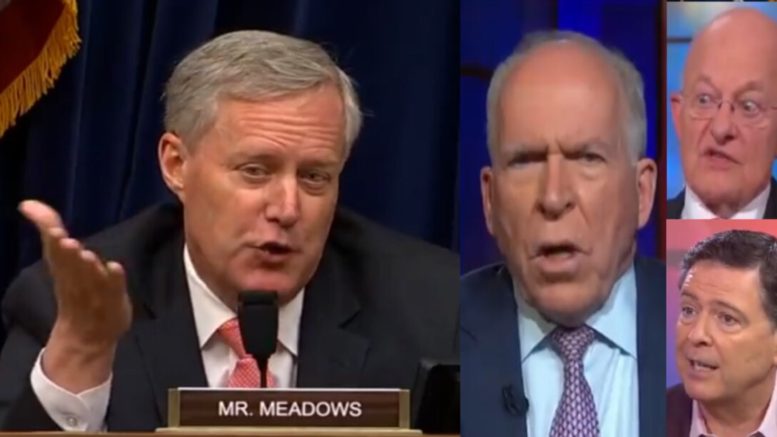 Ex-Obama CIA Director, John Brennan, and other intelligence community operatives are fuming about the declassification order from President Trump.

On Thursday, the President directed the heads of various intelligence community agencies, including the FBI and CIA to provide materials to the Attorney General as part of a review he is conducting into “spying” activities during Trump’s 2016 presidential campaign.

In a recent interview on MSNBC Friday, John Brennan demanded members of Trump’s cabinet to defy the authority given to Attorney General William Barr to declassify documents associated with surveillance of President Trump’s 2016 campaign.

(Related: Brennan Urges Members Of Trump’s Cabinet To ‘Stand Up’ To The Declassification Order

Due to the potential release of CIA sources and methods Brennan claimed, “I know that my former colleagues in the intelligence agencies are looking upon this with great concern and worry. The concern is that very, very precious source and methods of the United States intelligence community as well as our partners and allies abroad– those who share this sensitive information with us. I explore Dan Coats, Gina Haspel and others to stand up to this, I think, it’s an unprecedented act on the part of Mr. Trump.” (Continued Below)

But Brennan’s concern, which was echoed by other intelligence community veterans and TV pundits on Friday, may be wrong.

Government officials who appear to not be allies of Trump have been behind countless leaks of classified information regarding sources, methods and investigative targets in the Trump-Russia probe. Some of the leaks have disclosed the existence of surveillance warrants and FBI informants used against the Trump campaign, reported Daily Caller.

In one case, the FBI official who led the investigation into Russian interference, Peter Strzok, believed that the CIA was leaking highly classified assessments about Russia’s election-related activities to the press. (Continued Below)

“I’m beginning to think the agency got info a lot earlier than we thought and hasn’t shared it completely with us. Might explain all these weird/seemingly incorrect leads all these media folks have. Would also highlight agency as a source of some of the leaks,” Strzok wrote in a text message on April 13, 2017, per Daily Caller.

Strzok expressed a similar concern in a text message months earlier. “Think our sisters have begun leaking like mad. Scorned and worried and political, they’re kicking into overdrive,” Strzok wrote on Dec. 15, 2016, a day after NBC News reported that the CIA believed that Vladimir Putin directed the computer hacks against Democrats.

The need for secrecy was so great that CIA Director John Brennan hand-delivered information from a critical informant close to Russian President Vladimir Putin in an envelope to President Barack Obama in August 2016.

Now, one day after President Trump gave Attorney General William Barr “full and complete authority to declassify information” related to the origins of the federal investigation into possible ties between the Trump campaign and Russia, the New York Times reports this source is in jeopardy.

The declassification order, celebrated by GOP allies and derided by Democrats as a “plot to dirty up the intelligence community,” could put the Justice Department at odds with the CIA over the protection of the identity of this key informant who provided information about the Kremlin’s role in interfering in the 2016 election. (Continued Below)

Overseen by Brennan, the information delivered by this high-placed informant was treated with the utmost care but done so outside of the norm.

Word of this high-placed informant first came out in June 2017 in a Washington Post story that said Brennan began feeding this material to Obama and a small group of aides with a report in an envelope to be read and promptly returned to the CIA. The material was deemed so sensitive that it was kept out of the President’s Daily Brief due to concerns that too many people would be made aware of its contents.

Although the Post report said a courier was used to deliver this information, the Times piece said Brennan himself gave it to Obama.

As a former official would tell it, Obama “was deeply concerned and wanted as much information as fast as possible” and “wanted the entire intelligence community all over this.” A covert task force was put together by Brennan that coordinated with operations specialists at the CIA, National Security Agency, and FBI on Russia intelligence gathering and kept Obama apprised of their work.

Rep. Mark Meadows caught wind of Brennan’s “source” and he took to Twitter pinning part of the article and wrote, “The Brennan/Clapper/Comey and Co.’s house of cards is falling. And they know it.”

The Brennan/Clapper/Comey and Co.'s house of cards is falling. And they know it. https://t.co/GAPzIO6gof