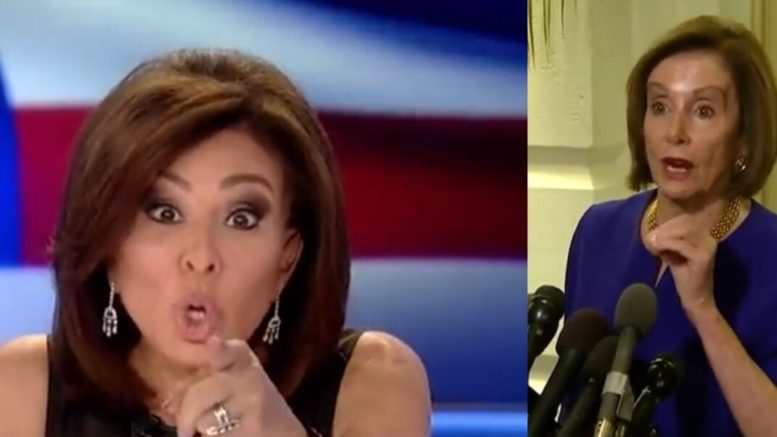 Saturday during her opening monologue on Fox News’ “Justice With Jeanine”, host Judge Jeanine Pirro ripped House Speaker Nancy Pelosi a new one after she claimed that President Trump was involved in a “coverup.”

The Judge didn’t hold back as she looked straight into the camera with a direct and fiery message for the House Speaker.

“Since when does asserting your legal rights amount to a coverup? Since when does going to court to settle an unprecedented legal issue a coverup? And why does the Commander in Chief and his family have to automatically grant every demand made by the party that has spent the last two years mocking and deriding him as an illegitimate President in an unrelenting assault on his presidency as they look for any reason to impeach him?” Judge Jeanine asked.

Jeanine explained that President Trump pushed back at Pelosi and stated in no uncertain terms “You cannot reinvestigate and legislate.” She declared, “He’s had it! We’ve all had it! It’s over! But the Democrats are not satisfied with the 2-year investigation by their guy, Bob Mueller, of the fake Russia collusion– with more lawyers, investigators, search warrants, subpoenas, and an international reach more than any other Special Counsel investigation in American history!”

Judge Jeanine believes that Democrats literally “want a do-over of the investigation,” adding, “As if there’s any way these Democrats, without the power to even impanel a grand jury, can do a more thorough job than Bob Mueller. They envision sitting on their perches in Washington and pontificating as the reinterview people already interviewed. They argue they have a constitutional duty to investigate.” (Continued Below)

The Judge went on to explain that Bob Mueller spent 2 years investigating with every “Trump-hating, Hillary-loving lawyer” that he could find and teed up with the benefits of “corrupt cardinal Comey”, who staged a fake dossier and investigation and then defrauded the FISA court. Mueller concluded that there was no collusion between Russia and the Trump campaign, but Democrats have had a “collective breakdown.”

“And every Democrat from Adam Schiff to Elijah Cummings to Jerry Nadler to Maxine Waters are conducting hearings to get any dirt they can get in any way they can get it,” she said.

“Now the President has it, and I don’t blame him. Every day the man gets up taking incoming from these halfwits stuck on stupid, telling him that he didn’t win fair and square, but the facts are incontrovertible! He won! But, they still believe that Russia helped because Russia bought a few Facebook ads that didn’t amount to a hill-a-beans and effected no-zero— no numbers,” the Judge stated. (Continued Below)

Judge Jeanine said that Ms. Pelosi showed up at the White House after trashing the President, yet again. “I ask you, how long do you think you could be called a criminal, a traitor, a Putin loving puppet before you say ‘Enough, I’ve had it!’ And, that’s just what he did.”

Then, she explained that Pelosi had a temper tantrum when the Speaker claimed that she “prays for the President” and that “his family, administration or staff should have an intervention with Trump for the good of the country.”

“And you say he’s crazy? He won! You lost. He’s on a mission to change the course that Obama and Clinton charted,” she said referring to Pelosi.

The Judge named off a list of accomplishments the President has achieved and asked, “What does he get for it? He’s a racist. He destroys the ISIS caliphate in the Middle East, something Obama couldn’t for the life of himself figure out, and what does Trump get for it? He’s a Muslim hater. He’s protecting Americans from unknowns crossing our border, including MS-13 gang members, who Obama wouldn’t stop, and what does he get for it? He’s a bigot. And when he tries to offer merit-based immigration to protect American workers and Americans at large, he’s called condescending.”

She noted that Democrats have wanted Trump impeached before he even took office. “And Nancy, you think he needs an intervention? The man is focused on his work, on the unfair trade deals, protecting farmers at the same time, and you of your band of loony lefties say [Trump is putting kerosene on the fire].”

“He doesn’t need an intervention, Nancy! You need the intervention! Maybe the President’s right,” Jeanine expressed as she played a clip of Trump explaining how Nancy is not the same person and that she’s lost it. [Emphasized] (Continued Below)

She continued, “Nancy you haven’t recovered from the 2016 election and it’s driving you batty! You want to requestion everybody that’s already been questioned under oath. You know Nancy, I remember a President who stayed back at the White House during a partial government shutdown waiting to work a deal with you and the Dems on the wall, while you all were galavanting in Hawaii and Puerto Rico… and because you can’t win fair and square, your ilk wants to change the rules.”

“Bottom line Nancy: the man is doing what we elected him to do while you haven’t done a damn thing as you seeth in the hatred and vitriol and your obsession to get your ‘truth’. Nancy, you already got the truth. And Nancy, you can’t handle the truth! So, just knock it the hell off, follow his lead, and start doing the job you were elected to do!” Judge Jeanine urged.