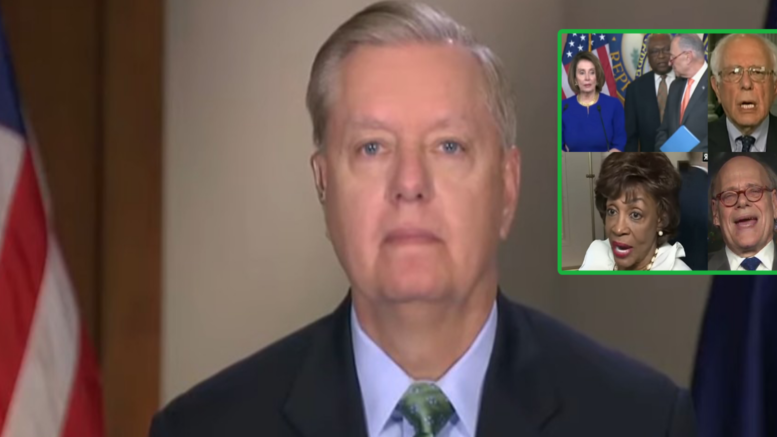 Senator Lindsey Graham joined Chris Wallace of Fox News to discuss a range of topics that have dominated the headlines over the past week.

The subject of impeachment was one of the topics discussed by Graham, as Democrats have been flirting more and more with the idea after former White House counsel Don McGahn did not show up for a scheduled hearing with the House Judiciary Committee.

In response, Nancy Pelosi called a meeting with other Democrat lawmakers go discuss the topic of impeaching the President, where told reporters after that she believes Trump is involved in a “cover-up.”

Despite this strong accusation, Pelosi tried to fan down the impeachment flames that is spreading throughout the Democrat party because, as Graham put it, she likely knows impeaching Trump would mean “political suicide.”

Graham began by saying he trusted Mueller to conduct a fair investigation. But as far as Democrats are concerned, he said, “I don’t trust House Democrats to be fair.”

“They’re trying to re-do the Mueller report, they’re trying to do other stuff,” Graham continued. “And at the end of the day, it would be political suicide for them to impeach. If I were the President, I would fight Nadler tooth and nail.” Videos Below

Graham then determined, “Nancy Pelosi is riding a bucking bronco, called the Democratic caucus. 70% of the Democratic base throughout America wants President Trump impeached. She knows impeaching the President would be political suicide because there is no reason to impeach the President.So she’s trying to keep the party intact.”

Related Article: Ronna McDaniel Exposes The Left’s Sudden Shift In Their Transparency Stance: ‘Funny How That Works, Isn’t It?’

“If she goes down the road of impeachment, Republicans take back the House, we keep the Senate, President Trump gets re-elected, but her job is very much at risk,” Graham declared. Videos Below

In ending, here is Graham’s full interview with Chris Wallace: