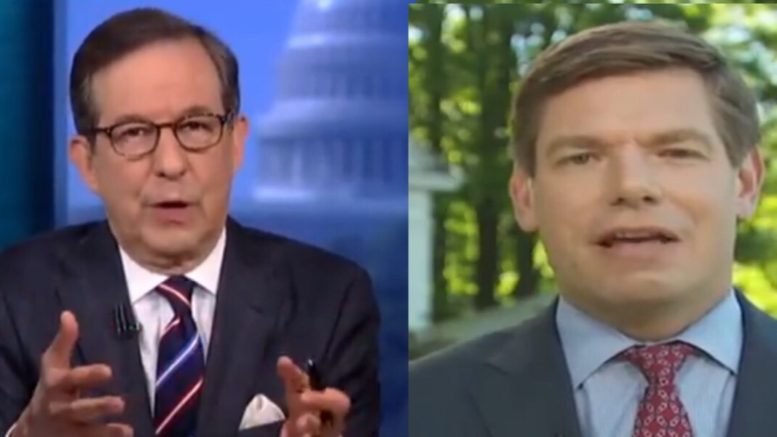 Rep. Eric Swalwell (D-CA), interviewed with host Chris Wallace on Fox News Sunday where he claimed that he still believes President Trump colluded with the Russians.

Despite Mueller’s 22-month phony witchhunt and the bottom line conclusions of “no collusion and no obstruction,” Democrats in Congress are still pursuing multiple investigations seeking a “re-do” of the investigation.

During his interview, Eric Swalwell began by claiming that he is concerned with the declassification that President Trump has ordered.

“What concerns me about this order by the President is that he is asking our intelligence community to essentially not do their job that we are asking them to do– the next time they see something like this. This is to put a chilling effect in place,” Swalwell said.

“So, if you’re an FBI agent and you get a tip that a foreign adversary is seeking to help either the Republicans or the Democrats in this upcoming election, you’re going to think twice about that because you may be attacked by this President or you may lose your job,” he suggested.

Swalwell tried to reignite the Trump/Russia collusion narrative next and said, “We should remember Mueller did not look at the financial aspect of Donald Trump and his family’s dealings with the Russians. That was a red line. We’re gonna look at that on the intelligence committee because we are not convinced that is not compromised. So, this work continues.”

Wallace played a clip of Swalwell where he claimed that Trump colluded and then he brought up on the screen Mueller’s statement that contradicts Swalwell. “The investigation did not establish that members of the Trump campaign conspired or coordinated with the Russian government in its election interference activities,” the Mueller report states in Volume 1 on page 5.

“The Mueller report spent 22 months, looked at all the evidence and says you were wrong,” Wallace bluntly said. (Continued Below)

Swalwell tried to switch gears and insinuate that Mueller didn’t find collusion because he didn’t look at Trump’s finances.

“[The Mueller report] did not say that Chris. It actually laid out 200 pages of contacts between the campaign. And because a prior Congress had a failure of imagination to specifically articulate a crime of collusion, doesn’t mean a future Congress should say we don’t want this to happen. I respect the Special Counsel’s finding that the laws we have today and with the limitations at not being able to look at finances, he could not prove beyond a reasonable doubt– conspiracy,” Swalwell claimed.

However, Wallace noticed that Swalwell was trying to spin an absurd narrative and filibuster, so he stopped him in tracks.

“Congressman, let’s look at the one case you gave there on that MSNBC interview where you said, ‘Well the President called for more hacking.’ I mean, seriously? I remember that vividly, I think most American’s do. It was in July after the hacking of the DNC and Donald Trump holds a news conference and says ‘Well you know… if the Russians want to find those 30k emails that Hillary Clinton deleted, I’m sure the media would be interested in that. You can’t possibly think that is collusion,” Wallace shot back. (Video Below)

“What did the Russians do next? The Mueller report lays out that they undertook more hacking within hours of that and this is just a month after the President’s son…” Swalwell claimed.

Wallace asked, “And, you think that was an order from Donald Trump? You don’t think the Russians were already, in fact, probably doing it?”

(Related: Swalwell Says Dems Are On The ‘Road To Impeachment’, But Vows To Get Rid Of Barr First)