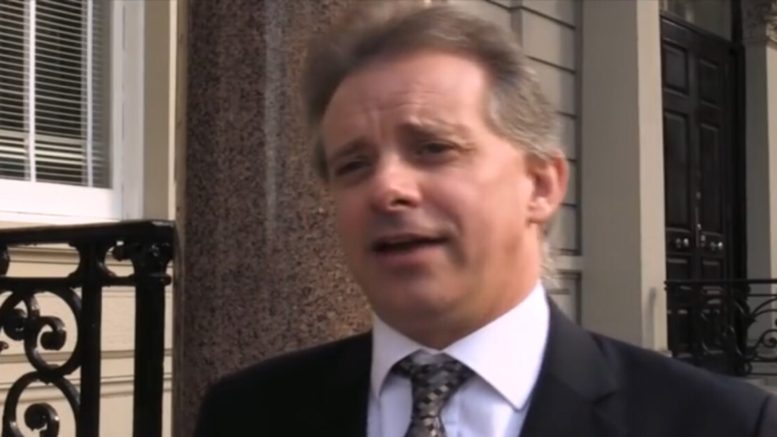 According to Reuters, Christopher Steele, the former British spy who compiled the hoax dossier alleging ties between President Donald Trump and Russia refuses to cooperate with the Department of Justice’s investigation into the origins of the Obama administration’s spying on then-candidate Trump’s 2016 presidential campaign

This comes after President Trump gave Attorney General William Barr the green light to declassify intelligence documents related to the probe and ordered several law enforcement agencies, including the CIA and FBI to cooperate with Durham’s review.

Christopher Steele, a former Russia expert for the British spy agency MI6, will not answer questions from prosecutor John Durham, named by Barr to examine the origins of the investigations into Trump and his campaign team, said the source close to Steele’s London-based private investigation firm, Orbis Business Intelligence.

Trump has given Barr broad authority to declassify intelligence materials related to the investigations. Last week Trump ordered the heads of U.S. spy and law enforcement agencies to cooperate with Durham.

Steele, who had previously collaborated with the FBI on issues such as corruption in the global soccer organization FIFA, was hired in 2016 by Fusion GPS, a Washington-based private investigations firm working for lawyers representing the Democratic Party and Hillary Clinton’s presidential campaign. (Continued Below)

Steele produced for Fusion GPS a set of controversial and sometimes salacious reports describing alleged contacts Trump and his team had with Russians before the election.

Trump says Steele’s “fake dossier” was a key factor behind the investigations and what he claims is a broader “witch hunt” against him. He also accuses senior intelligence officials of improperly “spying” on his campaign.

President of Judicial Watch, Tom Fitton said, “Clinton/Obama FBI-DOJ spy clams up on his collusion with Russia to smear @realDonaldTrump.”

Clinton/Obama FBI-DOJ spy clams up on his collusion with Russia to smear @realDonaldTrump. https://t.co/mJdPbysYHC

Former UK spy Christopher Steele, who was paid by Hillary Clinton's campaign through Fusion GPS to fabricate the phony "dossier," is refusing to cooperate with the DOJ investigation into the Obama Administration's decision to spy on the 2016 Trump campaign https://t.co/SDyFRpRRcP

Steele told Kavalec that Trubnikov & Surkov, 2 Putin disinformation specialists, were his sources. If this is accurate it means the media blew the 3 biggest stories of our time. Collusion was a hoax, Spygate is real, & the Clinton/FBI source (Steele) colluded with the Russians.