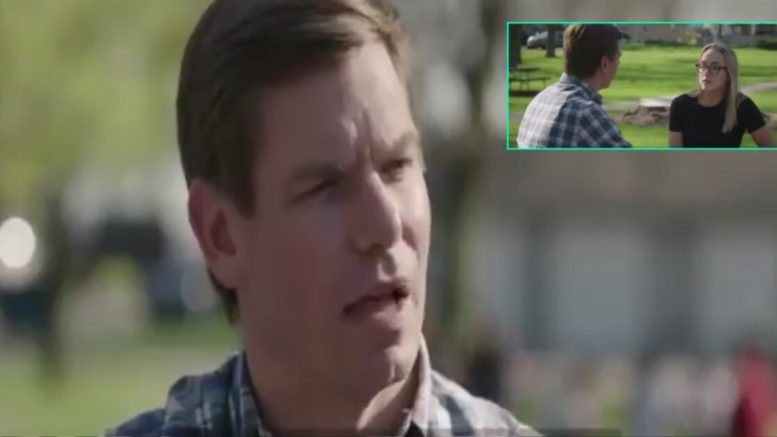 During an interview with Vice News, Rep. Eric Swalwell (D-CA) explained that as a “white guy”, he knows when to promote other people’s voices when asked why he should be the Democratic Party’s nominee for president.

Swalwell claimed that he understood that he had “gaps in his knowledge of racial issues in America” and would seek advice from people of color on such issues if elected.

“A white guy who doesn’t see other identities or understand other experiences should not be President,” Swalwell suggested.

He continued, “I do. And where there would be gaps in my knowledge or my experience, I will pass the mic to people who do have that experience.”

Swalwell tweeted his comments on Twitter and wrote, “I may be ‘another white guy,’ but I know where there are gaps in my knowledge or my experience and I know when to pass the mic.”

Twitterverse reacted and Swalwell instantly got roasted. (Video Below)

I may be "another white guy," but I know where there are gaps in my knowledge or my experience and I know when to pass the mic. pic.twitter.com/jMYBwF97xY

Donald Trump Jr. said, “Hard to believe that this isn’t a parody account.”

Hard to believe that this isn’t a parody account. https://t.co/ExJPYjMPnA

“I’m sorry for my existence” isn’t exactly an inspiring platform for a potus candidate… https://t.co/lhagOuM0jP

Here are some of our favorite reactions:

There’s a huge gap between your ears buddy.

Why are you not 50 points ahead, you might ask? pic.twitter.com/vUhmaas0Jm

You are polling at 0%

You are Definetly suffering from toxic masculinity. In fact I see no sign of any masculinity. Did all the real men leave the Dimmocrat party?

This is soo cringe.
Sorry but a man who constantly apologizes for things he was born with and can’t control – the fact that he’s a man, and his skin color – does not have any business being a leader

My Lord, you’re an idiot. I PRAY you don’t drop out of the race just to get a weekly dose of stupid from your twitter account.

Oh, fuck off you massive cuck!

Who’d ever trust a smarmy-pandering-sanctimonious-disingenuous-ass-kisser, like you, @ericswalwell? You don’t even have enough self-dignity, or confidence to say why you’re qualified to be called a man, much less be elected as #POTUS🙄😎

At least that one is true 👍🏼

This loser doesn’t even have confidence in himself 🤷‍♂️

Why is he even wasting his time embarrassing his entire family doing this? 😂