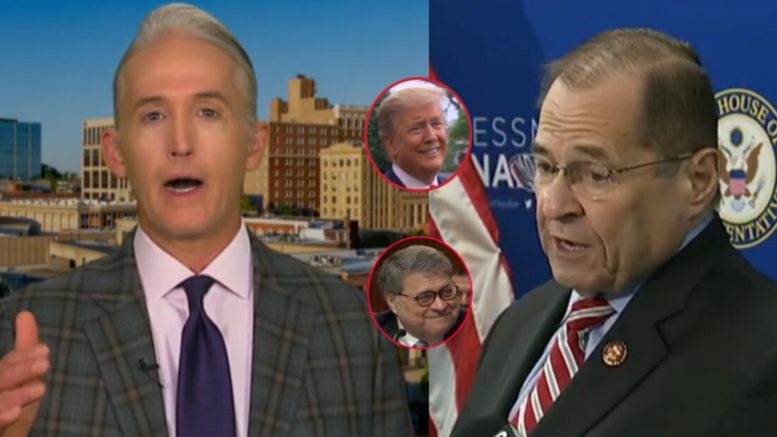 Special Counsel Robert Mueller spoke publicly on Wednesday and officially concluded his two-year-long investigation into allegations of Russian collusion during 2016 election. Further, he closed his office and retired from the Department of Justice.

Special Counsel Robert Mueller, in his first public appearance since being appointed to lead the Russia investigation, said it was “not an option” to charge President Trump with a crime, citing Department of Justice policy, but maintained that if they had “confidence” that the president did not commit a crime, they “would have said so,” reported Fox News.

“Charging the President with a crime was not an option we could consider. It would be unfair to accuse someone of a crime when there could be no court resolution of the charge. We concluded that we would not reach a determination one way or the other about whether the President committed a crime,” Mueller said. “That is the office’s final position.”

However, Nadler jumped the gun during a press conference he held Wednesday and claimed, “With respect to impeachment at this point, all options are on the table and nothing should be ruled out. The President is lying about the Special Counsel’s findings– lying and saying that the Special Counsel found no obstruction and no collusion, and I should add the Attorney General is lying about that too.”

Nadler added, “That is serious and we will take action to hold the President accountable for his misconduct. No one, not even the President is above the law.” (Continued Below)

Trey Gowdy responded to Nadler’s accusations and said that he noticed the Chairman’s term of language when he suggested that Trump and Barr ‘lied’ adding, “I also noticed the word ‘misconduct’, and I’m beginning to wonder if we live in a country where there’s any presumption of innocence.”

He explained that Rep. Adam Schiff (D-CA) has called for Barr to be jailed and noted that 60 House Democrats moved forward with impeachment before Robert Mueller even released his report.

“So, the notion that there’s some dispassionate, objective open-minded group on the Democrats House Judiciary… they’re trying to figure out the politics of going forward with impeachment when you know you’re not gonna get a conviction,” Gowdy said. (Continued Below)

He went on to say, “What this may result in is 2020 being a referendum of whether or not you want to see Donald Trump indicted. That’s what this is winding up to be.”

Gowdy also pointed out that Mueller’s public statement was about Russia interfering and said, “The problem is: no one in the House, or very few in the House, feel that same passion about attacking Russia as the enemy, they’d rather fight with each other.

(Related: Pres Trump Reacts After Robert Mueller Makes A Statement To The Press: ‘The Case Is Closed! Thank you’)